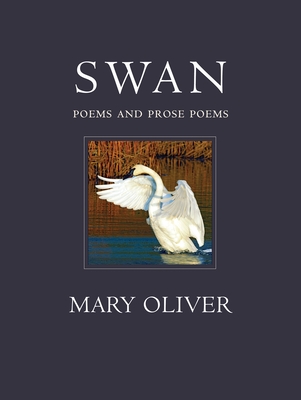 “Joy is not made to be a crumb,” writes Mary Oliver, and certainly joy abounds in her new book of poetry and prose poems. Swan, her twentieth volume, shows us that, though we may be “made out of the dust of stars,” we are of the world she captures here so vividly: the acorn that hides within it an entire tree; the wings of the swan like the stretching light of the river; the frogs singing in the shallows; the mockingbird dancing in air. Swan is Oliver’s tribute to “the mortal way” of desiring and living in the world, to which the poet is renowned for having always been “totally loyal.”

As the Los Angeles Times noted, innumerable readers go to Oliver’s poetry “for solace, regeneration and inspiration.” Few poets express the immense complexities of human experience as skillfully, or capture so memorably the smallest nuances. Speaking, for example, of stones, she writes, “the little ones you can / hold in your hands, their heartbeats / so secret, so hidden it may take years / before, finally, you hear them.” It is no wonder Oliver ranks, according to the Weekly Standard, “among the finest poets the English language has ever produced.”

“One of the astonishing aspects of Oliver’s work is the consistency of tone over this long period [of her career]. What changes is an increased focus on nature and an increased precision with language that has made her one of our very best poets. . . . Although few poets have fewer human beings in their poems than Mary Oliver, it is ironic that few poets also go so far to help us forward.”
—Stephen Dobyns, New York Times Book Review

“Mary Oliver’s poetry is fine and deep; it reads like a blessing. Her special gift is to connect us with our sources in the natural world, its beauties and terrors and mysteries and consolations.”
—Stanley Kunitz

“Mary Oliver’s poems are natural growths out of a loam of perception and feeling, and instinctive skill with language makes them seem effortless. Reading them is a sensual delight.”
—May Swenson

“Like Henry David Thoreau of Transcendentalist fame she is a naturalist whose attention to what used to be called the Book of Nature borders on both devotion and experimentation. . . . Mindfulness seems to be Oliver’s métier, looking and listening her scientific method and contemplative practice.”
—Stephen Prothero, Search

“I should be clear that Mary Oliver is, to my mind, one of the most gifted American poets working in English today. In her hands, the language acquires a lucidity approaching translucence; the accuracy of her vision and the precision of her voice are unique in their refreshing simplicity. Perhaps most singular is the tendency of her poems to be at once powerful and appealing; an affection for the natural world and a sympathy toward the reader abide.”
—Katherine Hollander, Pleiades

“Mary Oliver moves by instinct, faith, and determination. She is among our finest poets, and still growing.”
—Alicia Ostriker, The Nation

“One would have to reach back perhaps to [John] Clare or [Christopher] Smart to safely cite a parallel to Oliver’s lyricism.”
—David Barber, Poetry

“The music in Oliver’s writing is unmistakable. Her poetry can be read as the best of the real lyrics we have these days, and it’s no surprise that she’s already won a Pulitzer Prize for it, as well as many other honors.”
—Los Angeles Times

With her new collection, this winner of the National Book Award for Poetry and the Pulitzer Prize in Poetry once again joyfully celebrates the natural world.
—Ms. magazine

“You can pick up pretty much any Mary Oliver collection and be thrilled, but Swan…is so piercing and penetrating that form seems to fall away, an unnecessary stage for the rocket.”
—Christian Century
or
Not Currently Available for Direct Purchase
Copyright © 2020 American Booksellers Association