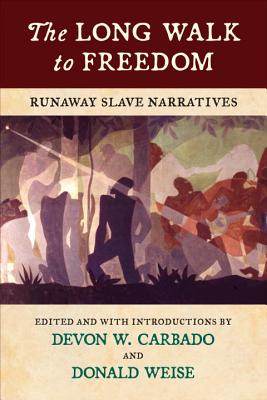 The Long Walk to Freedom (Hardcover)

In this groundbreaking compilation of first-person accounts of the runaway slave phenomenon, editors Devon W. Carbado and Donald Weise have recovered twelve narratives spanning eight decades—more than half of which have been long out of print. Told in the voices of the runaway slaves themselves, these narratives reveal the extraordinary and often innovative ways that these men and women sought freedom and demanded citizenship. Also included is an essay by UCLA history professor Brenda Stevenson that contextualizes these narratives, providing a brief yet comprehensive history of slavery, as well as a look into the daily life of a slave. Divided into four categories—running away for family, running inspired by religion, running by any means necessary, and running to be free—these stories are a testament to the indelible spirit of these remarkable survivors.

The Long Walk to Freedom presents excerpts from the narratives of well-known runaway slaves, like Frederick Douglass and Harriet Jacobs, as well as from the narratives of lesser-known and virtually unknown people. Several of these excerpts have not been published for more than a hundred years. But they all portray the courageous and sometimes shocking ways that these men and women sought their freedom and asserted power, often challenging many of the common assumptions about slaves’ lack of agency.

Among the remarkable and inspiring stories is the tense but triumphant tale of Henry Box Brown, who, with a white abolitionist’s help, shipped himself in a box—over a twenty-seven-hour train ride, part of which he spent standing on his head—to freedom in Philadelphia. And there’s the story of William and Ellen Craft, who fled across thousands of miles, with Ellen, who was light-skinned, disguised as a white male slave-owner so she and her husband could achieve their dream of raising their children as free people.

Gripping, inspiring, and captivating, The Long Walk to Freedom is a remarkable collection that celebrates those who risked their lives in pursuit of basic human rights.

Devon W. Carbado is professor of law and African American studies at the University of California at Los Angeles and the coeditor of several books, including Race Law Stories (with Rachel Moran) and Time on Two Crosses: The Collected Writings of Bayard Rustin (with Donald Weise).

Donald Weise is an independent scholar in African American history and coeditor of The Huey Newton Reader (with David Hilliard). He lives in New York.

Praise For The Long Walk to Freedom: Runaway Slave Narratives…

"This book is a must-read for anyone who wants to understand the historical reality of the slave experiences. Carbado and Weise have diligently selected narratives that will challenge readers' presumptions and cut against the mythology that slaves were passive, that mostly men (and not women) ran away, that slaves typically ran North (not South), and that gender and racial passing were rare occurrences. A landmark achievement, The Long Walk to Freedom allows fugitive slaves to speak for themselves—on their own terms and in their own voices."—Dr. Mary Frances Berry, Geraldine R. Segal Professor of American Social Thought and professor of history at the University of Pennsylvania


“The editors step aside and let these remarkable men and women tell their own stories.”—Kirkus Reviews

"Readers will learn more about slavery in the American South from these autobiographical accounts than they could from any textbook."–Wall Street Journal
or
Not Currently Available for Direct Purchase
Copyright © 2020 American Booksellers Association