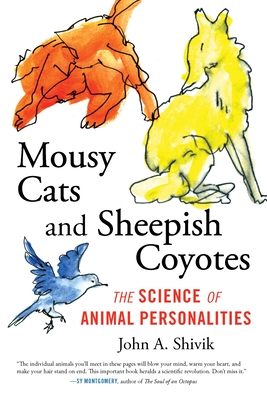 The Science of Animal Personalities

A wildlife expert explores what science tells us about animals as unique individuals and why animal personality matters for the human-animal bond and for adaptation in nature.

Why are some cats cuddly and others standoffish? Why are some dogs adventuresome, others homebodies? As any pet owner can attest, we feel that the animals we’ve formed bonds with are unique, as particular (and peculiar) as any human friend or loved one.

Recent years have brought an increased understanding of animal intelligence and emotion. But is there a scientific basis for animal personality and individuality, or is this notion purely sentimental? It turns out that science has been reluctant to even broach the subject of individuality until recently. But now, a fundamental shift in scientific understanding is underway, as mainstream scientists begin to accept the idea that animals of all kinds—from beloved beasts like apes and birds to decidedly less cuddly creatures like crabs and spiders—do indeed have individual personalities.

In Mousy Cats and Sheepish Coyotes, veteran wildlife expert Dr. John A. Shivik brings us stories from the front lines of this exciting new discipline. Drawing on his scientific training, as well as his storytelling gifts, Shivik serves as an accessible, humorous guide to the emerging body of research on animal personalities. Shivik accompanies researchers who are discovering that each wolf, bear, and coyote has an inherent tendency to favor either its aggressive nature or to shyly avoid conflicts. Some bluebirds are lovers, others are fighters. And some spiders prefer to be loners, while others are sociable. Unique personalities can be discovered in every corner of the animal kingdom—even among microscopic organisms. The array of personality types among all species is only beginning to be described and understood.

As Shivik argues, animals’ unique personalities are important not only because they determine which animals we bond with. Individual animal traits are also fundamental but still inadequately understood drivers of evolution, adaptation, and species diversity. Ultimately, Mousy Cats and Sheepish Coyotes offers insight into the similarities humans share with animals and presents evidence of an unbroken biological connection from the smallest organisms to Homo sapiens.

Praise For Mousy Cats and Sheepish Coyotes: The Science of Animal Personalities…

“A fascinating, accessible, and well-documented work that will be enjoyed by those interested in animal behavior and anyone who has ever had a pet with personality to spare.”
—Library Journal

“Anyone who’s had the pleasure (or not) of spending time with other animals, ranging from insects to reptiles to fish to birds to big-brained mammals, knows they’re unique individuals with a wide variety of personalities. In this important book, Dr. John Shivik combines cutting-edge science with wonderful stories and shows that a wide variety of nonhumans are neither mindless nor all the same. Rather, they’re fascinating beings who can be timid, bold, shy, outgoing, and, on occasion, downright obnoxious. And it’s their unique personalities that bond us to them, because in so many ways they display the same range of personalities as do we.”
—Marc Bekoff, author of The Animals’ Agenda

“Old-fashioned biologists used to thinking only in terms of species may be shocked by Shivik’s premise, but ordinary readers will find their instincts borne out. From one-celled creatures to us, nature selects for a variety of personality types. The world is full of individuals, and this wonderful and fascinating book shows why and how.”
—Dan Flores, author of Coyote America: A Natural and Supernatural History

“How wonderful to see science confirming what we know in our hearts to be true: emotional bonds are created between individuals, and every living being has its own uniqueness. In his own playful voice, Dr. Shivik confirms that evolution is driven by difference, not sameness, and that personality is more important than looks for creatures great and small. An important and delightful read!”
—Michael Dowd, author of Thank God for Evolution

“I’ll tell you what’s rarer than a mousy cat or a sheepish coyote: a behavioral scientist who’s gutsy enough to admit he had animals pegged all wrong! Brave, funny, honest, and insightful, John Shivik’s new book chronicles his transformation and the revelations that come with understanding that, like people, all animals are individuals. From cats to coyotes to guppies to bees, the individual animals you’ll meet in these pages will blow your mind, warm your heart, and make your hair stand on end. This important book heralds a scientific revolution. Don’t miss it.”
—Sy Montgomery, author of The Soul of an Octopus

“Dr. John Shivik relates his personal conversion to the viewpoint that each animal has his or her own personality, an idea that scientists have resisted until recently. This enjoyable book is loaded with fun personal anecdotes, as well as solid scientific information. I highly recommend it.”
—Con Slobodchikoff, author of Chasing Doctor Dolittle

John Shivik has served as a federal researcher, state predator biologist, federal regional wildlife program manager, and search-and-rescue dog handler. He has published widely in scientific and popular media, and is the author of The Predator Paradox: Ending the War with Wolves, Bears, Cougars, and Coyotes.
Loading...
or
Not Currently Available for Direct Purchase