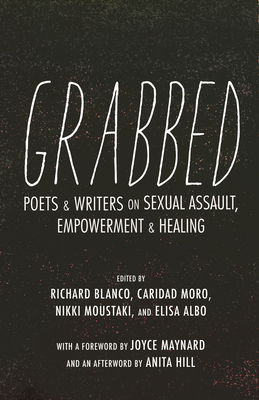 A gender-inclusive anthology of poetry and prose that addresses the physical and psychological act of being "grabbed," or in any way assaulted.

The #MeToo movement, the infamous Access Hollywood tape, and the depraved and hypocritical actions of celebrities, politicians, CEOs, and other powerful people have caused people all over the nation to speak out in outrage, to express allegiance for the victims of these assaults, and to raise their voices against a culture that has allowed this behavior to continue for too long.

The editors asked writers and poets to add to the conversation about what being "grabbed" means to them in their own experience or in whatever way the word "grabbed" inspired them. What they received are often searing, heart-rending works, ranging in topic from sexual misconduct to racial injustice, from an unwanted caress to rape, expressed in powerful, beautifully crafted prose and poetry.

The writers represented here, some very well known, such as Rita Dove, Jericho Brown, Eileen Miles, Ana Menendez and Sapphire, as well as some newer voices not yet fully discovered, have mined their collective experiences to reveal their most vulnerable moments, and in some cases, to narrate moments that they have had previously been unwilling or unable to speak of. What results is a collection of emotional, hard-hitting pieces that speak to the aftermath of violation - whether mental, emotional, or physical.

Richard Blanco is the award-winning author of several books. Blanco's poetry collections include City of a Hundred Fires, Directions to the Beach of the Dead, and How to Love a Country. He currently serves as the first-ever Education Ambassador for the Academy of American Poets and is a member of the Obama Foundation's advisory council.

Caridad Moro is the award-winning author of Visionware. She is the recipient of an Elizabeth George Foundation Grant and a Florida Individual Artist Fellowship in poetry. Her poems and essays have been nominated for the Pushcart Prize and Best of the Net and have appeared in numerous publications and anthologies. She is the Associate Editor for the daily online literary journal, SWWIM Every Day.

Nikki Moustaki is the author of the memoir, The Bird Market of Paris. She is the recipient of a National Endowment for the Arts grant in poetry, along with many other national writing awards. Her poetry, fiction, and essays have appeared in various literary magazines, anthologies, and textbooks.

Elisa Albo is the author of the poetry collection Passage to America and Each Day More, a collection of elegies. Her poems have appeared in many journals and anthologies.