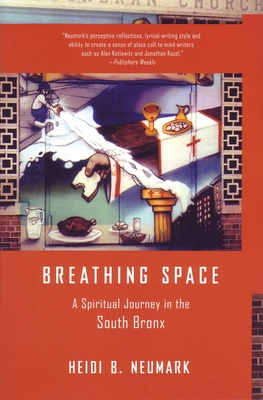 A Spiritual Journey in the South Bronx

Breathing Space is the story of Heidi Neumark and the Hispanic and African-American Lutheran church-Transfiguration-that took a chance calling on a pastor from a starkly different background. Despite living and working in a milieu of overwhelming poverty and violence, Neumark and the congregation encounter even more powerful forces of hope and renewal.

This story of a community creating space for new life and breath is also the story of a young woman-working, raising her children, and struggling for spiritual breathing space. Through poignant, intimate stories, Neumark charts her journey alongside her parishioners as pastor, church, and community grow in wisdom and together experience transformation.

Praise For Breathing Space: A Spiritual Journey in the South Bronx…

With its hard-nosed realism and passion for God, this memoir should appeal to people of faith across the political spectrum.--Publishers Weekly (starred review)

"Surrounded by violence and poverty and threatened by urban renewal, Transfiguration Lutheran Church under pastor Neumark survived and, perhaps miraculously, thrived . . . Her story proves genuinely inspirational as we follow her from despair and frustration to cautious optimism in the face of a still tenuous future." --Booklist

"Breathing Space is a beautifully produced book, and it has a utopian poignancy . . . Yet it is grounded in the virtue of hope."--James S. Torrens, America: The National Catholic Weekly

Heidi B. Neumark has served as pastor of Transfiguration Lutheran Church in the South Bronx since 1984. She is a founding member of South Bronx Churches, an ecumenical community organizing group that has trained local leaders, built hundreds of low-cost homes, and established a top-ranked public high school. She lives with her family in New York City.
Loading...
or support indie stores by buying on