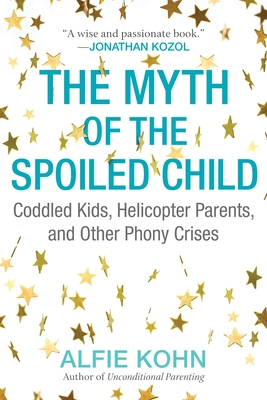 The Myth of the Spoiled Child

A prominent and esteemed critic challenges widely held beliefs about children and parenting, revealing that underlying each myth is a deeply conservative ideology that is, ironically, often adopted by liberal parents.

Somehow a set of deeply conservative assumptions about children—what they’re like and how they should be raised—has congealed into the conventional wisdom in our society. Parents are accused of being both permissive and overprotective, unwilling to set limits and afraid to let their kids fail. Alfie Kohn systematically debunks these beliefs, not only challenging erroneous factual claims but also exposing the troubling ideology that underlies them. Complaints about pushover parents and coddled kids are hardly new, he shows, and there is no evidence that either phenomenon is especially widespread today—let alone more common than in previous generations. Moreover, new research reveals that helicopter parenting is quite rare and, surprisingly, may do more good than harm when it does occur. The major threat to healthy child development, Kohn argues, is parenting that is too controlling rather than too indulgent.

With the same lively, contrarian style that marked his influential books about rewards, competition, and education, Kohn relies on a vast collection of social science data, as well as on logic and humor, to challenge assertions that appear with numbing regularity in the popular press and are often accepted uncritically, even by people who are politically liberal. These include claims that young people

• suffer from inflated self-esteem
• are entitled and narcissistic
• receive trophies, praise, and A’s too easily
• are in need of more self-discipline and “grit”

Kohn’s invitation to reexamine these and other assumptions is particularly timely; his book has the potential to change our culture’s conversation about kids and the people who raise them.

Praise For The Myth of the Spoiled Child: Coddled Kids, Helicopter Parents, and Other Phony Crises…

“With his trademark blend of skepticism and idealism, [Kohn] dismantles most of the hype surrounding motivation and competition, failure and success.”
—Boston Globe

“Kohn picks apart the script that today’s kids are coddled and lazy—complaints every generation makes about the succeeding one.”
—Atlanta Journal-Constitution

“Kohn explains why the belief that modern parents are too permissive (or too overprotective) and that kids are entitled, narcissistic monsters is wrong. He has the research to back it up and creates a convincing argument.”
—San Francisco Book Review

“Filled with surprising insights and counterintuitive data. An energetic...argument against all the columnists, politicians and pundits who insist children today are spoiled.”
—Lenore Skenazy, New York Times Book Review

“A wise and passionate book—by one of the best friends our children have today—that is also a delight to read.”
—Jonathan Kozol, author of Fire in the Ashes

“A well-researched, important counter-truth to all the foolishness...A must-read for parents who care.”
—Seth Godin, author of Linchpin

“Splendid...Kohn’s analysis is incisive, witty, and fun to read. In a manner that reminds me of Voltaire, Kohn brings clear and profound social criticism to a topic of great contemporary importance.”
—William Crain, author of Reclaiming Childhood

“An insightful, well-informed, thorough analysis of the many false and hostile claims made about parents and children today. Kohn patiently dismantles myths and then provides a positive vision of parenting for our time.”
—Jeffrey Jensen Arnett, coauthor of When Will My Grown-Up Kid Grow Up?

Alfie Kohn writes and speaks widely on human behavior, education, and parenting. The author of thirteen books and scores of articles, he lectures at education conferences and universities, as well as to parent groups and corporations. Kohn’s criticisms of competition and rewards have been widely discussed and debated, and he has been described in Time magazine as “perhaps the country’s most outspoken critic of education’s fixation on grades [and] test scores.”
Loading...
or
Not Currently Available for Direct Purchase