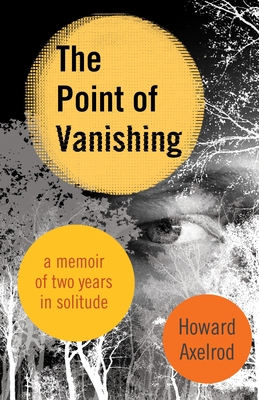 The Point of Vanishing

A Memoir of Two Years in Solitude

After losing vision in one eye and becoming estranged from his family and friends, a young man spent two years searching for identity in self-imposed solitude in the backwoods of northern Vermont, where he embarked on a project of stripping away facades and all social ties--and learned to face himself.

On a clear May afternoon at the end of his junior year at Harvard, Howard Axelrod played a pick-up game of basketball. In a skirmish for a loose ball, a boy’s finger hooked behind Axelrod’s eyeball and left him permanently blinded in his right eye. A week later, he returned to the same dorm room, but to a different world. A world where nothing looked solid, where the distance between how people saw him and how he saw had widened into a gulf.

Desperate for a sense of orientation he could trust, he retreated to a jerry-rigged house in the Vermont woods, where he lived without a computer or television, and largely without human contact, for two years. He needed to find a more lasting sense of meaning away from society’s pressures and rush.

Praise For The Point of Vanishing: A Memoir of Two Years in Solitude…

“Axelrod lyrically captures the essence of nature as he ponders his own self-worth and purpose in life. . . . In his first book, the author pushes beyond the boundaries and safety nets of the modern world and opens a doorway to feelings and experiences many long for but never encounter. His writing is a balm for world-weary souls. A vibrant, honest, and poetic account of how two years of solitude surrounded by nature changed a man forever.”
—Kirkus Reviews, Starred Review

“This elegant, questioning memoir details that moment and events prior to it, but mostly it achingly limns Axelrod’s two years living alone in a ramshackle cabin in the Vermont woods. His writing—whether describing an aspect of the wilderness around him or noting the “first lesson of solitude: everything really is your fault”—is lush and savory, exact in its intent to document just how Axelrod regained the ability to feel “that quiet of already belonging.” That he allows the reader to participate in this journey, from whatever distance, is more than a pleasure—it’s an honor. . . . Axelrod so adroitly and wisely re-creates the youngster he was that readers forget the passing of time, hearing only the voice of sorrow, longing, and determination. This memoir is a keeper, touching and eloquent, full of hard lessons learned. Readers will hope for more from first-time-author Axelrod.”
—Booklist, Starred Review

“A deeply felt and moving journey into no longer taking life, or the world around us, for granted.”
—Library Journal

“Mr. Axelrod is clearly a gifted writer...The best thing about Mr. Axelrod’s frequently absorbing book is how idiosyncratic it feels; he is a unique presence on the page.”
—New York Times Daily Review

“What makes his book completely mesmerizing—besides his lovely prose, that is—is how exquisitely it balances between the poles of revelation and disintegration. Yet, refreshingly, he never repudiates the extremity of what he’s done. He’s come in from the woods with a strange tale to tell, but what makes you want to stop whatever you’re doing and listen to him is the frosty breath of the wild that still clings to his coat.”
—Slate Book Review

“The Point of Vanishing: A Memoir of Two Years in Solitude is an inherently absorbing and compelling read from beginning to end. Exceptionally well written, organized and presented, The Point of Vanishing is very highly recommended for both community and academic library Contemporary American Biography collections.”
—Midwest Book Review

“Axelrod is a master of metaphor, presenting familiar sights and sounds in unforgettable new ways. His writing is propulsive, unabashedly visionary, and strikingly fresh. This book will have you turning down pages, returning to sentences just to savor them, and reading passages aloud to anyone who will listen...The Point of Vanishing is a profoundly immersive narrative. One is struck again and again by the quality of the writing: by the vividness of its characters, by the accomplished lyricism of its language, by the brilliant acuity of its observations, and by the wisdom and humor that permeate its pages. What lingers most of all are Axelrod’s sharply wrought landscape descriptions. Setting is definitely an active character in this story...This memoir feels like a gift in a way that few books do...If you read it with an open heart, it has the power to change your life.”
—The Rumpus

“Axelrod weaves a lyrical, questioning narrative about his search for identity after a basketball game left him blind in one eye...Lush descriptions of sensory experiences as Axelrod discovers new ways of seeing the world, and himself, illuminate a journey of loss leading to insight with Axelrod finding the core of himself amid the pieces of who he had once been.”
—Shambhala Sun

“Occasionally a book comes along that has the power to transport readers to a place that many of us, I believe, wonder about, if only in the darkest moments of the night. Howard Axelrod’s memoir, The Point of Vanishing, was such a book for me...It is a brave book. It is also finely crafted, which is what enables it to carry the reader step by step into a dark but illuminating interior space...Axelrod skillfully plays the narrative of his time in the woods against a parallel backstory. The two threads ultimately merge, and he comes very close to passing right through some imagined bottom into another dark realm, one from which there very likely is no escape...Though The Point of Vanishing isn’t a map, it charts some of the territory that lies between the hard surfaces of the world and the murky depths in the shadows within all of us. The story is a beacon for those who have ever sensed such a realm.”
—Portland Press Herald

“Beautiful in its intensity, searing in its pain. It’s a breathtaking read.”
—Minneapolis Star-Tribune

“Deeply alive and exciting and nuanced . . . all about what it means to see, and how we might ask ourselves to see differently—to live differently in our own bodies, and in the world . . . Powerful and ineffable, it feels like a blessing.”
—Leslie Jamison, author of The Empathy Exams

“Axelrod uses his seclusion in the natural solitary world of the North in winter to explore how we can have vision without really seeing. Well written with an honesty one can respect, The Point of Vanishing is more than an exploration of the human soul; it is a discovery of how our bodies can compensate and complement for our senses when we experience the partial loss of one.”
—Annie Philbrick, Bank Square Books

“This is a very real book, in bone-on-bone contact with the actual world. It made me think about my own life in new ways, and I think it will do the same for you.”
—Bill McKibben, author Deep Economy

“Blindness and insight are the twin subjects of Howard Axelrod’s intricate and beautiful memoir of his two years of solitude. . . . The unimportant falls away, in this book, and what comes closer is a luminous sense of the essential, the beautiful, the sacred, and the unspeakable.”
—Charles Baxter, author of The Feast of Love

“A sensitive and sensual book about seeing and feeling deeply; witty, wise, and beautifully written from beginning to end.”
—Geraldine Brooks, author of March

“Out of sudden and profound loss, Axelrod has drawn a haunting, tender memoir that grips like an emotional thriller. The Point of Vanishing is raw, exquisitely written, and full of poetic insights. This is a big book about big truths that matter to us all. It delivers a message of hope and strength, and reveals what is most human in our most unspoken yearning for something real, something true. In its subtle, deeply moving way, it will have you peering beneath the various faces you present to the world and encourage you to ask the most fundamental of questions: who am I alone?”
—Bella Pollen, author of The Summer of the Bear

Howard Axelrod’s essays have appeared in the New York Times Magazine, Salon, Virginia Quarterly Review, and the Boston Globe, among other publications. He has taught at Harvard, the University of Arizona, and currently teaches writing at Loyola University in Chicago. His debut book, The Point of Vanishing: A Memoir of Two Years in Solitude, evocatively chronicles his experience of retreating into nature following a basketball accident that left him permanently blinded in one eye. The memoir was named one of the best books of 2015 by Slate, the Chicago Tribune, and Entropy Magazine, and one of the best memoirs of 2015 by Library Journal. In a starred review, Kirkus called the book a “vibrant, honest, and poetic account” of Axelrod’s search for quiet and for a different, more internalized and introspective way of seeing.
Loading...
or support indie stores by buying on