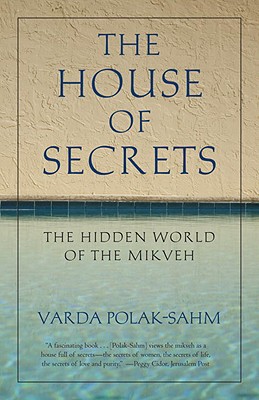 The House of Secrets

The Hidden World of the Mikveh

For Orthodox Jews, immersion in a ritual bath—the mikveh—is the cornerstone of family life and is central to Jewish women’s practice of their faith. Yet women from across the Jewish spectrum frequent the mikveh, often for surprising personal reasons. Roused by her own immersion experience, for years Varda Polak-Sahm, a secular Jew, patiently observed and interviewed women at the mikveh, gaining unprecedented access to this hidden world. The House of Secrets offers a richly nuanced, uncensored look at an experience that is for some holy and for others coercive, ultimately illuminating the remarkable power of ritual immersion.


Praise For The House of Secrets: The Hidden World of the Mikveh…

“Polak-Sahm mesmerizes the reader with her encounters at the mikveh...brilliantly illuminates these tensions and their religious and cultural meanings, not just intellectually but, like all good anthropologists, in a way that produces a rich understanding of people’s lives.”
—Christian Century

“A compelling examination of the nature and meaning of this ritual which has remained clouded with mystery and secrecy for centuries.”
—Frederic and Mary Ann Brussat, SpiritualityandPractice.com

“[The House of Secrets] truly lifts the curtain on this world, often unknown to all but its participants. . . . [A] captivating book.”
—Carol Poll, Jewish Book World

“Unique amongst works about mikveh in that [Polak-Sahm] draws on the deeply personal and revealing narratives of religious and secular women who come regularly to immerse. The stories of these women come alive here.”
—Marion Lev-Cohen, Lilith

“Totally honest and full of surprises . . . Refreshingly, this writing is neither a Pollyanna version of the laws of family purity nor a cheap shot at them.”
—Blu Greenberg, author of How to Run a Traditional Jewish Household

Varda Polak-Sahm is a seventh-generation Jerusalemite, the author of three books, and an internationally known photographer and researcher of folklore. "From the Trade Paperback edition."
Loading...
or
Not Currently Available for Direct Purchase