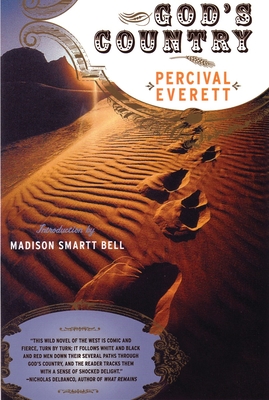 The unlikely narrator through this tale of misadventures is one Curt Marder: gambler, drinker, cheat, and would-be womanizer. It's 1871, and he's lost his farm, his wife, and his dog to a band of marauding hooligans. With nothing to live on but a desire to recover what is rightfully his, Marder is forced to enlist the help of the best tracker in the West: a black man named Bubba.

'I loved this book. God's Country is like no western I've ever read before: a wonderfully strange and darkly hilarious brew of Kafka and GarcÌa Marquez, of Twilight Zone and F-Troop, with cameo appearances by Walt Whitman and George Custer thrown in for good measure. Percival Everett has written a terrific book, a Wild West road trip that challenges our assumptions about what human dignity really means.'--Bret Lott, author of Jewel: A Novel

'This wild novel of the West is comic and fierce, turn by turn; it follows white and black and red men down their several paths through God's Country, and the reader tracks them with a sense of shocked delight.'--Nicholas Delbanco, author of What Remains

Percival Everett is the author of eleven novels including the recent Erasure, which won the inaugural Hurston/Wright Legacy Award for fiction. He lives with his wife on a small ranch and teaches at the University of Southern California, Los Angeles.
Loading...
or support indie stores by buying on