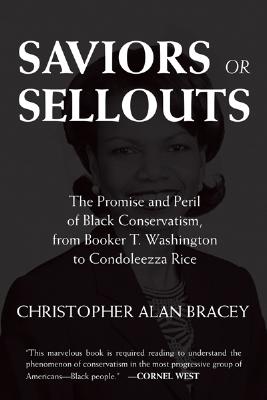 The Promise and Peril of Black Conservatism, from Booker T. Washington to Condoleezza Rice

What exactly is a black conservative, and why would anyone choose to be one? This question, deemed largely irrelevant in years past, is one that liberals can no longer afford to leave unanswered. While the 2006 midterm elections buoyed liberals, Democrats have in fact been losing ground with their African American base. In 1972, fewer than 10 percent of African Americans identified themselves as conservative; today nearly 30 percent-11.2 million-do. By contrast, the number of blacks who self-identify as liberal continues to decline, reaching a low of 13 percent in 2004. In this groundbreaking book, Bracey explains black conservatism's growing appeal and traces its hidden and underappreciated history.

Though black conservatives are becoming the most visible voices within African American politics and culture, few realize that the black conservative tradition predates the Civil War and is an intellectual movement with deep historical roots. Bracey takes his readers on a remarkable journey, tracing the evolution of black conservative thought from its origins in antebellum Christian evangelism and petty entrepreneurialism to its contemporary expression in policy debates over affirmative action, law enforcement practices, and the corrosive effects of urban African American artistic and cultural expression.

Bracey examines black neoconservatives like Shelby Steele and John McWhorter and reveals the philosophies of prominent political conservatives such as Clarence Thomas, Colin Powell, and Condoleezza Rice. With a revealing chapter on the infotainment effect of Bill Cosby, Chris Rock, pundits, and bloggers, Bracey analyzes the tradeoffs made by conservatives-many of which raise serious questions about whether conservatives today are effectively protecting the interests of blacks. Original and penetrating, Saviors or Sellouts is the first account of why conservatism remains a coherent and compelling alternative for African Americans today.


Praise For Saviors or Sellouts: The Promise and Peril of Black Conservatism, from Booker T. Washington to Condoleezza Rice…

This marvelous book is required reading to understand the phenomenon of conservatism in the most progressive group of Americans—Black people. —Cornel West, author of Race Matters

"This important and fascinating engagement with the growing black conservative movement illuminates one of the most vexing political trends of our time. Written by a leading African American liberal, it powerfully traces the intellectual character and practical appeal of this growing movement, and offers a realistic and empathetic yet sharply critical appraisal."—Ira Katznelson, author of When Affirmative Action Was White: An Untold History of Racial Inequality in Twentieth-Century America and Ruggles Professor of Political Science and History, Columbia University

"Bold and provocative, Saviors or Sellouts challenges us to rethink long-standing political labels as part of larger quest for social justice and black community empowerment in the twenty-first century."—Peniel E. Joseph, author of Waiting 'Til the Midnight Hour: A Narrative History of Black Power in America

"In seeking to chart the topography of black conservatism, Bracey undertakes a task not only necessary to the new millenium’s politics of blackness but also brave. Neither black liberals nor conservatives have a monopoly on the truth, nor does either group have an innate right to the hearts and minds of the community; it is only by respecting each other enough to engage in a respectful debate that blacks can heal themselves and fight for their preferences in the body politic. This work will aid immeasurably in achieving that goal. It is long overdue."—Debra J. Dickerson, author of The End of Blackness: Returning the Souls of Black Folk to their Rightful Owners

"Saviors or Sellouts is a must read—not only to identify black conservatives but, indeed, to understand them." —Mary Frances Berry, author of My Face is Black is True: Callie House and the Struggle for Ex-slave Reparations and Professor of History, University of Pennsylvania