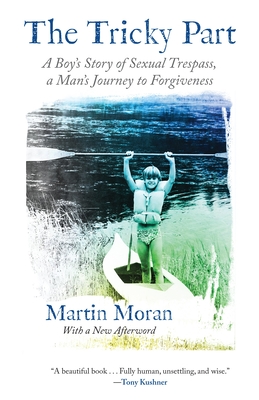 A Boy's Story of Sexual Trespass, a Man's Journey to Forgiveness

Between the ages of twelve and fifteen, Martin Moran had a sexual relationship with an older man, a counselor he’d met at a Catholic boys’ camp. Almost thirty years later, at the age of forty-two, he set out to find and face his abuser. The Tricky Part tells the story of this relationship and its complex effect on the man Moran became. Told with startling candor and disarming humor, The Tricky Part carries us to the heart of a paradox: that what we think of as damage may be the very thing that gives rise to transformation, even grace.

Praise For The Tricky Part: A Boy's Story of Sexual Trespass, a Man's Journey to Forgiveness…

“Marvelous, courageous, and, above all, thoughtful.”
—The Washington Post

“A subtly rendered and remarkably even-handed journey toward redemption.”
—The Philadelphia Inquirer

“[One of] the best LGBT books of all time...A haunting memoir of abuse and redemption.”
—Benoit Denizet-Lewis, The Good Men Project

“Martin Moran not only writes unflinchingly about the sexual abuse of a child; he expands it into a meditation on suffering, despair, forgiveness, redemption, and the mysterious workings of grace. He elevates the confessional to the level of art.”
—Michael Cunningham, author of The Hours

Martin Moran makes his living as an actor and writer in New York City. He has appeared in many Broadway and Off-Broadway plays, including Titanic, Cabaret, Bells Are Ringing, and Floyd Collins. He won a 2004 Obie Award for his one-man play, The Tricky Part, which New York Times theater critic Ben Brantley praised for the quiet victory of "rendering chaos with this kind of clarity." Moran continues to perform The Tricky Part all over the country.
Loading...
or
Not Currently Available for Direct Purchase