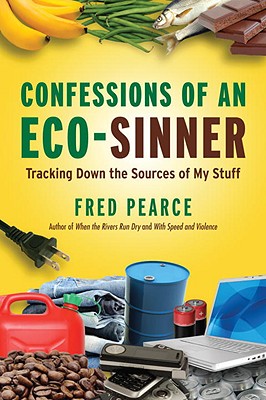 Confessions of an Eco-Sinner (Hardcover)

Tracking Down the Sources of My Stuff

“It's official: Everyone is going green. Sometimes, though, learning which behaviors really make a difference seems an impossible task. In Confessions of an Eco-Sinner, Fred Pearce is determined to find the truth by following his possessions from the cradle to the grave. What he learns is sometimes disturbing, occasionally rewarding, and always eye-opening.”
— Rachel Tavares, Changing Hands Bookstore, Tempe, AZ
View the List

Where does everything in our daily lives come from? The clothes on our backs, the computers on our desks, the cabinets in our kitchens, and the food behind their doors? Under what conditions-environmental and social-are they harvested or manufactured? Veteran science journalist Fred Pearce set off to find out, and the resulting 100,000-mile journey took him to the end of his street and across the planet to more than twenty countries.

Pearce deftly shows us the hidden worlds that sustain a Western lifestyle, and he does it by examining the sources of everything in his own life; as an ordinary citizen of the Western world, he, like all of us, is an "eco-sinner."

In Confessions of an Eco-Sinner, Pearce surveys his home and then launches on a global tour to track down, among other things, the Tanzanians who grow and harvest his fair-trade coffee (which isn't as fair as one might hope), the Central American plantations that grow his daily banana (a treat that may disappear forever), the women in the Bangladeshi sweatshops who sew his jeans, the Chinese factory cities where the world's computers are made, and the African afterlife for old cell phones. It's a fascinating portrait, by turns sobering and hopeful, of the effects the world's more than 6 billion inhabitants-all eating, consuming, making-have on our planet, and of the working and living conditions of the people who produce most of these goods.

Praise For Confessions of an Eco-Sinner: Tracking Down the Sources of My Stuff…

In tracing the lineage of his 'stuff,' Fred Pearce's graceful and engaging book illuminates the invisible ways in which our ordinary possessions connect us to workers we will never know and forests we will never explore. Starting at the intersection of environmental threats, excessive consumption and exploited workers, Confessions points us toward a far more nurturing, meaningful and humane future.—Ross Gelbspan, author of The Heat Is On and Boiling Point

"Required reading for anyone who's ever worn a t-shirt, used a cell phone or computer, sipped a cup of coffee, or taken out the garbage. Pearce travels beyond the carbon footprint of our consumer society to explore the forgotten social footprint, bringing us to the unlikely and sometimes unseemly places where our stuff is born, and where it goes to die."—William Alexander, author of The $64 Tomato: How One Man Nearly Lost His Sanity, Spent a Fortune, and Endured an Existential Crisis in the Quest for the Perfect Garden

"More and better stuff-the promise of our age. But where does it come from and what does it cost, ecologically and in human suffering? Fred Pearce decided to find out and the story is compelling but not pretty. With any luck, this brilliant book will change our insatiable demand for more material goods and guide us, and our planet, to spiritual and eco health."—Maude Barlow, author of Blue Gold: The Fight to Stop the Corporate Theft of the World's Water

"Tracking the routes taken by the items in his home-his coffee, cell phone, computer, green beans, chocolate, socks-from raw ingredient to finished product, the author presents fascinating firsthand investigations, as when he visits a group of fair-trade coffee farmers, follows the trail of his donated shirts to markets in Africa, visits Uzbek communities whose health, infrastructure and environment have been devastated by the cotton industry, and interviews female sweatshop workers who view their factory jobs as empowering."—Publishers Weekly