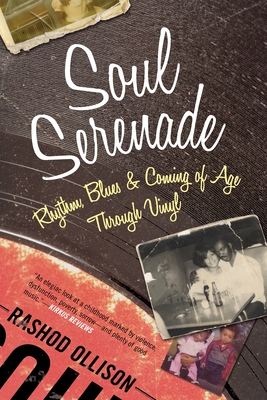 Growing up in rural Arkansas, young Rashod Ollison turned to music to make sense of his life. The dysfunction, sadness, and steely resilience of his family and neighbors was reflected in the R&B songs that played on 45s in smoky rooms.

Steeped in the sounds, the smells, the salty language of rural Arkansas in the 1980s, Soul Serenade is the memoir of a pop music critic whose love for soul music was fostered by his father, Raymond. Drafted into the Vietnam War as a teenager, Raymond returned a changed man, “dead on the inside.” After his parents’ volatile marriage ended in divorce, Rashod was haunted by the memory of his itinerant father and his mama’s long forgotten “sunshine smile.” For six-year-old Rashod, his father’s record collection—the music of Aretha Franklin, Bobby Womack, Al Green, and others—provided solace, coherence, and escape.

Moving nine times during his childhood, Rashod constantly adjusted to new schools and homes with his two sisters, Dusa and Reagan, and his mother, Dianne. Resilient and tough, while also being distant and punitive, she worked multiple jobs, striving “to make ends wave at each other if they couldn’t meet.” He spent time with his acerbic mother’s mother, Mama Teacake, and her family’s living-out-loud ways, which clashed with his father’s family—religious, discreet, and appropriate—where Rashod gravitated to Big Mama and Paw Paw, his father’s parents.

Becoming aware of his same-sex attraction, Rashod felt further isolated and alone but was encouraged by mentors in the community who fostered his intelligence and talent. He became transformed through discovering the writing of Toni Morrison, Alice Walker, Nikki Giovanni, and other literary greats, and these books, along with the soulful sounds of the 1970s and 80s, enabled him to thrive in spite of the instability and harshness of his childhood.

In textured and evocative language, and peppered with unexpected humor, Soul Serenade is an original and captivating coming-of-age story set to an original beat.

“Testifies to the powerful ways that music provides the soundtrack underneath the harmony and discord of his life...Ollison’s moving memoir captures and colorfully reveals the ways that music can soothe the pain.”
—Publishers Weekly

“Gifted memoirist Ollison uses the authentic language of home, profane and poetic, to vividly describe a childhood lived in a state of impermanence.”
—The Minneapolis Star Tribune

“Ollison is to be highly commended for writing this, tough, disturbing, heartfelt, and music-filled book and for making his easily stereotyped family life and background movingly real...Readers will be turning to downloads, podcasts, CDs—and records—to play along to get full effect of this riveting and engaging book. They will also be anxious for Rashod Ollison’s next set to drop.”
—Lambda Literary

“In Soul Serenade Ollison lifts the curtain so readers can better understand poverty, constant attacks on the most personal aspects of the self, and the enormous effort it takes to rise above and be free.”
—The Virginian-Pilot

“A beautiful memoir rendered with deep feeling and a finely tuned musicality.”
—David Ritz, author of Respect: The Life of Aretha Franklin

“Soul Serenade is a moving and beautifully written memoir. Music is ubiquitous throughout: a constant companion as a gifted young boy comes of age and finds his own creative and critical voice. Rashod Ollison has given us a compelling narrative that is sure to become a classic.”
—Farah Jasmine Griffin, author of If You Can’t Be Free, Be a Mystery: In Search of Billie Holiday

Rashod Ollison (1977–2018) was an award-winning pop music critic and culture journalist. He was a staff critic and feature writer for the Dallas Morning News, Philadelphia Inquirer, Journal News (Westchester, New York), Baltimore Sun, and Virginian-Pilot. He also wrote a music column for Jet magazine. A native of Little Rock, Arkansas, Ollison lived in Virginia Beach.
Loading...
or
Not Currently Available for Direct Purchase