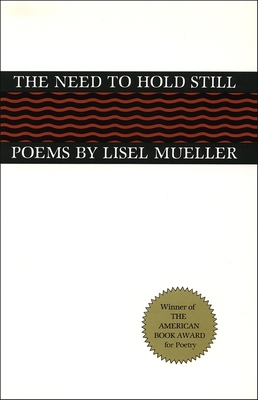 The Need to Hold Still

Winner of the National Book Award for Poetry

An adventurer, Lisel Mueller pursues the protean possibilities of communication. In Dreiser's works she finds language solid, "as plain as money, / a workable means of exchange." More often she experiences exhilaration in the shapes that communication makes possible. In "Talking with Helen," for example, she re-creates Heller Keller's flash of discovery when water suddenly became language, the stream that connected time and space, maple leaves and hands. Mueller's poetry links varying forms: music and discourse, memory and immediacy. Perennial weeds in her title poem recall ancient times and prayerful monks. Musical names--"Teasel / yarrow / goldenrod / wheat / bed straw"--hold the moment still like the echoes of a tolling bell. "I'm trying to make connections," Lisel Mueller says of her poems, "looking for links between where we have been and where we are going, between the life outside and the life within."

Lisel Mueller was born in Hamburg, Germany in 1924. She published six books of poetry with LSU Press, including Alive Together: New & Selected Poems (1996), which was awarded a Pulitzer Prize; Waving from Shore (1989); Second Language (1986); The Need to Hold Still (1980), winner of the National Book Award; The Private Life, the 1975 Lamont Poetry Selection; and Dependencies (1998). Her writing honors included the Carl Sandburg Award and a National Endowment for the Arts fellowship.
Loading...
or support indie stores by buying on