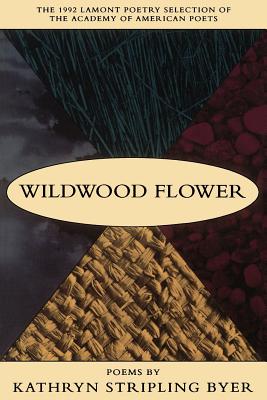 In Wildflower Flower, whose title derives from a traditional country song, Byer speaks through the fictional voice of a mountain woman named Alma, who lived in the Blue Ridge wilderness around the turn of the century. In narrative and lyric, Byer's poems sing a journey through solitude, capturing the spirit and the sound of mountain ballads and of the women who sang them, stitching bits and pieces of their hardscrabble lives into lasting patterns. The landscape Byer depicts is haunted by disappointed love and physical hardship, but it is blessed with dogwood and trillium, columbine and hickory, and streams that sing a ballad as strong as any Alma has learned from mother or grandmother. Through these natural details and through Alma's indomitable voice, Kathryn Stripling Byer has brilliantly recreated a lost world.

A native of Georgia, Kathryn Stripling Byer has lived in the western North Carolina mountains since receiving a graduate degree from the University of North Carolina at Greensboro, where she studied with Allen Tate, Robert Watson, and Fred Chappell. Her several books of poetry have received honors from the Associated Writing Programs, the Academy of American Poets, the Fellowship of Southern Writers, and the Southern Independent Booksellers Alliance.
Loading...
or support indie stores by buying on