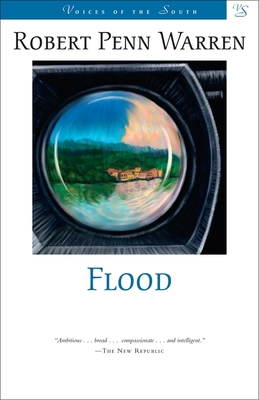 A Romance of Our Time (Voices of the South)

Originally published in 1963, this powerful novel spools a rewarding, dramatic storyline while it probes the deeper philosophical search for self-definition in modern life and the symbolic demise of the agrarian South from technological progress. Flood begins with the arrival of two men in a small Tennessee town -- Brad Tolliver, long-absent native son and successful screenwriter, and Yasha Jones, famous director and stranger to the region. Their purpose is to create a great film about the town, which will soon vanish when the massive dam being built downriver is completed. The town's inhabitants come vividly to life as past and present forces prepare them for a climactic new beginning to their world.

Robert Penn Warren (1905--1989) is the only writer to have won a Pulitzer Prize for fiction and another (two) for poetry. He was influential as a novelist (All the King's Men), critic (Understanding Poetry and Understanding Fiction), editor (Southern Review), poet (first U.S. poet laureate), and teacher (Yale and Louisiana State University, among others). Born in Guthrie, Kentucky, he was educated at Vanderbilt University and Oxford.
Loading...
or support indie stores by buying on