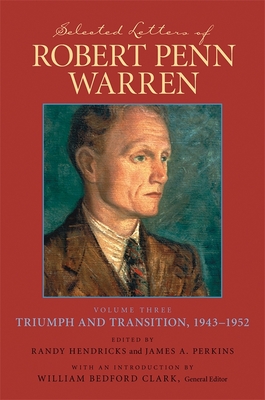 Selected Letters of Robert Penn Warren, Volume three, provides an indispensable glimpse of Warren the writer and the man, covering a crucial decade in his life. Edited by Randy Hendricks and James A. Perkins, and introduced by William Bedford Clark, this collection of largely previously unpublished letters and newly discovered material documents Warren's time at the University of Minnesota, his writing and publication of the Pulitzer Prize-winning novel All the King's Men, his appointment as Consultant in Poetry at the Library of Congress, and his divorce from Emma "Cinina" Brescia and subsequent marriage to the writer Eleanor Clark.

The period 1943-1952 also saw the publication of "A Poem of Pure Imagination"; World Enough and Time; The Ballad of Billie Potts; At Heaven's Gate; and Selected Poems, 1923-1943. Warren's letters shed new light on those works and on his close relationship with his editors Lambert Davis and Albert Erskine. Included too is correspondence concerning Warren's collaboration with Robert Rossen on the movie production of All the King's Men, which received the Academy Award for best picture in 1949. The list of friends and colleagues with whom Warren communicated reads like a roll call of major twentieth-century literary figures and clearly shows his ever-widening influence on the world of letters. Spanning a remarkable range in both style and tone, the letters disclose Warren's attitudes toward his work as a teacher and his thoughts on the events of World War II, the Korean War, and the political conflicts in postwar Europe. Thoroughly annotated and scrupulously researched, Volume Three captures Warren in an extraordinary phase in his life and career, reaching his maturity and making many commitments at once yet pursuing them all with a seemingly boundless energy.

Robert Penn Warren (1905-1989) was born in Guthrie, Kentucky, and attended Vanderbilt University, where he became a member of the Fugitive movement. An acclaimed novelist, poet, critic, and teacher, the author of dozens of books, he was a man of letters in the truest sense. He was the only writer ever to receive Pulitzer Prizes in both fiction and poetry. James A. Perkins, professor emeritus of English and public relations at Westminster College in New Wilmington, Pennsylvania, is the editor of The Cass Mastern Material: The Core of Robert Penn Warren's "All the King's Men" and coeditor of Robert Penn Warren's All the King's Men: Three Stage Versions; For the Record: A Robert Drake Reader; Southern Writers at Century's End; and the poetry collection Brother Enemy: Poems of the Korean War. Randy Hendricks is a professor of English at the University of West Georgia. He is the author of Lonelier than God: Robert Penn Warren and the Southern Exile and a collection of short stories, The Twelfth Year and Other Times. He is also the coeditor of For the Record: A Robert Drake Reader. William Bedford Clark is a professor of English at Texas A&M University, the author of The American Vision of Robert Penn Warren, and the editor of volumes one and two of the Selected Letters of Robert Penn Warren.
Loading...
or support indie stores by buying on