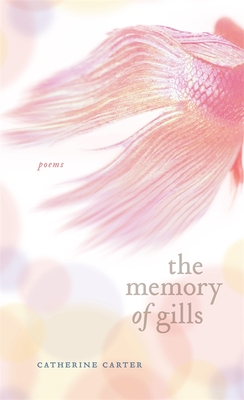 The Memory of Gills

Catherine Carter's first volume of poetry exudes a genuinely classical quality-cool-eyed and clear-eyed, intelligent, unsentimental, self-aware, and witty in the fullest and best sense. Carter takes our evolutionary development in the womb as a departure point for remembering or imagining our links with nonhuman animals, which make us feel both alien and alive. She writes of being raised by wolves, that everyone marries into another species, and of hearing things in the voices of the rattlesnake plantain or the apple core. With an offbeat, sometimes-gallows humor-the poems' subjects range from roadkill to stingray-human sex to a traffic ticket for avoiding toads on the road-that looks at our connections of blood, home, and exile, The Memory of Gills nonetheless speaks of hope that we belong where we are.Last night or rather this morning she called
on the telephone in my dream. She thought it was
Thanksgiving, and she didn't know she was dead.
I didn't want to tell her she was dead, or going to die
this May, which in the dream was still next May. I told her
about the job I still had last Thanksgiving,
tried to remember. My mother was there and spoke
to her; no one knew quite what to say
except love -- and before that I woke up.
She called, across six months, six feet;
she called us, and we didn't know how to go
or what to say. Dead was too heavy, we couldn't
say that; we couldn't say anything really. Except love,
which this one time ought to have been enough,
but, as it always is, was nothing like enough.
-- The Telephone in My Dream.

Catherine Carter 's poems have appeared in Poetry; North Carolina Poetry Review; Cider Press Review; and other journals. A native of the tidewater region of Maryland, she now lives in Cullowhee, North Carolina, where she is an assistant professor of English at Western Carolina University.
Loading...
or support indie stores by buying on