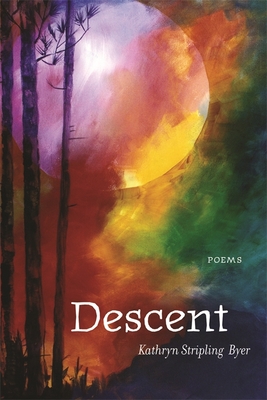 Navigating the dangerous currents of family and race, Kathryn Stripling Byer's sixth poetry collection confronts the legacy of southern memory, where too often it's safer to stay blind.
Beginning with Morning Train, a response to Georgia blues musician Precious Bryant, Byer sings her way through a search for identity, recalling the hardscrabble lives of her family in the sequence Drought Days, and facing her inheritance as a white southern woman growing up amid racial division and violence. The poet encounters her own naive complicity in southern racism and challenges the narrative of her homeland, the Gone with the Wind mythology that still haunts the region.
Ultimately, Descent creates a fragile reconciliation between past and present, calling over and over again to celebrate being, as in the book's closing manifesto, Here. Where I am.

A native of Georgia, Kathryn Stripling Byer has lived in the western North Carolina mountains since receiving a graduate degree from the University of North Carolina at Greensboro, where she studied with Allen Tate, Robert Watson, and Fred Chappell. Her several books of poetry have received honors from the Associated Writing Programs, the Academy of American Poets, the Fellowship of Southern Writers, and the Southern Independent Booksellers Alliance.
Loading...
or support indie stores by buying on