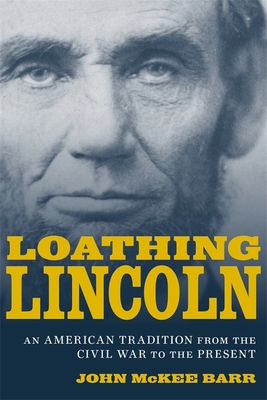 An American Tradition from the Civil War to the Present (Conflicting Worlds: New Dimensions of the American Civil War)

While most Americans count Abraham Lincoln among the most beloved and admired former presidents, a dedicated minority has long viewed him not only as the worst president in the country's history, but also as a criminal who defied the Constitution and advanced federal power and the idea of racial equality. In Loathing Lincoln, historian John McKee Barr surveys the broad array of criticisms about Abraham Lincoln that emerged when he stepped onto the national stage, expanded during the Civil War, and continued to evolve after his death and into the present.
The first panoramic study of Lincoln's critics, Barr's work offers an analysis of Lincoln in historical memory and an examination of how his critics -- on both the right and left -- have frequently reflected the anxiety and discontent Americans felt about their lives. From northern abolitionists troubled by the slow pace of emancipation, to Confederates who condemned him as a black Republican and despot, to Americans who blamed him for the civil rights movement, to, more recently, libertarians who accuse him of trampling the Constitution and creating the modern welfare state, Lincoln's detractors have always been a vocal minority, but not one without influence.
By meticulously exploring the most significant arguments against Lincoln, Barr traces the rise of the president's most strident critics and links most of them to a distinct right-wing or neo-Confederate political agenda. According to Barr, their hostility to a more egalitarian America and opposition to any use of federal power to bring about such goals led them to portray Lincoln as an imperialistic president who grossly overstepped the bounds of his office. In contrast, liberals criticized him for not doing enough to bring about emancipation or ensure lasting racial equality. Lincoln's conservative and libertarian foes, however, constituted the vast majority of his detractors. More recently, Lincoln's most vociferous critics have adamantly opposed Barack Obama and his policies, many of them referencing Lincoln in their attacks on the current president. In examining these individuals and groups, Barr's study provides a deeper understanding of American political life and the nation itself.

JOHN McKEE BARR is professor of history at Lone Star College--Kingwood.
Loading...
or support indie stores by buying on