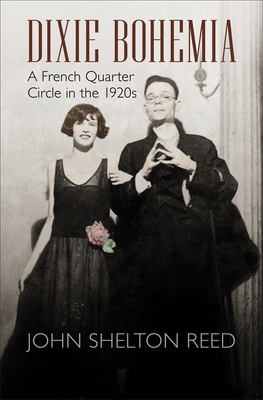 In the years following World War I, the New Orleans French Quarter attracted artists and writers with its low rents, faded charm, and colorful street life. By the 1920s Jackson Square had become the center of a vibrant if short-lived bohemia. A young William Faulkner and his roommate William Spratling, an artist who taught at Tulane University, resided among the artful and crafty ones of the French Quarter. In Dixie Bohemia John Shelton Reed introduces Faulkner's circle of friends -- ranging from the distinguished Sherwood Anderson to a gender-bending Mardi Gras costume designer -- and brings to life the people and places of New Orleans in the Jazz Age.

Reed begins with Faulkner and Spratling's self-published homage to their fellow bohemians, Sherwood Anderson and Other Famous Creoles. The book contained 43 sketches of New Orleans artists, by Spratling, with captions and a short introduction by Faulkner. The title served as a rather obscure joke: Sherwood was not a Creole and neither were most of the people featured. But with Reed's commentary, these profiles serve as an entry into the world of artists and writers that dined on Decatur Street, attended masked balls, and blatantly ignored the Prohibition Act. These men and women also helped to establish New Orleans institutions such as the Double Dealer literary magazine, the Arts and Crafts Club, and Le Petit Theatre. But unlike most bohemias, the one in New Orleans existed as a whites-only affair. Though some of the bohemians were relatively progressive, and many employed African American material in their own work, few of them knew or cared about what was going on across town among the city's black intellectuals and artists. The positive developments from this French Quarter renaissance, however, attracted attention and visitors, inspiring the historic preservation and commercial revitalization that turned the area into a tourist destination. Predictably, this gentrification drove out many of the working artists and writers who had helped revive the area. As Reed points out, one resident who identified herself as an artist on the 1920 federal census gave her occupation in 1930 as saleslady, real estate, reflecting the decline of an active artistic class. A charming and insightful glimpse into an era, Dixie Bohemia describes the writers, artists, poseurs, and hangers-on in the New Orleans art scene of the 1920s and illuminates how this dazzling world faded as quickly as it began.

John Shelton Reed is William Rand Kenan Jr. Professor Emeritus of sociology at the University of North Carolina, Chapel Hill, and a co-founder of the Center for the Study of the American South and the quarterly Southern Cultures. He has written or edited 19 books, most of them about the American South, and was recently Chancellor of the Fellowship of Southern Writers.
Loading...
or support indie stores by buying on