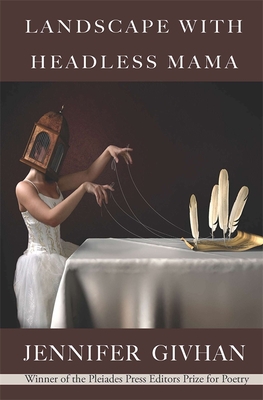 "Pardon me, but I'm shivering a bit at my core. These are restless, storm-hued stanzas, revelations of our dark cravings and hapless, woefully imperfect attempts at perfect love. Here are the dreams even our dreams won't reveal, flaunting wild edges and endings that nudge the soul, each fusing of lyric and lesson as potent as a backhand slap. And Mama watches everything. Mama sees it all." - Patricia Smith

"What's living without fear of getting lost?" That's only one of many empowering moments in Jennifer Givhan's auspicious debut. Her "blood magic" ink delivers the hard truths that kick-start the healing of the "splintered cactus" that hurdles the path of a woman's journey. Landscape with Headless Mama blossoms with the "strange alloys of sadness" that devastate motherhood and femininity, and then nurture their wounds back to vibrant life." - Rigoberto Gonz lez "In Jennifer Givhan's Landscape with Headless Mama, the vivid truth of these poems evokes both the wince of pain and the head-rush of joy, the familial and the romantic disconnections we endure and those connections found in the same terrain that we, still, manage to cherish. If there's a line in these poems that doesn't surprise, I couldn't find it; one never knows where the poem will take us. I found myself tracing "maps of the borderland into my body/ cliff dwelling, the taste of red brick on the tongue...." Each figure rendered, each voice conjured comes to life with their distinct journey, and Givhan continues to remind us of yet another truth: "There are other ways for the story to end." Indeed, the possibilities seem limitless in this world she builds. If a collection of poems can be called a page-turner, this is what it feels like." - A. Van Jordan
"These are true border poems, restlessly crossing between the real and the surreal, the loved and the used up, the fertile and the infertile, and the hungry and the sated. Jennifer Givhan is a dangerous poet in all the necessary ways."-Connie Voisine Landscape with Headless Mama explores the experiences of becoming and being a mother through the lens of dark fairy tales. Describing the book as "a surreal survival guide," Givhan draws from the southwestern desert, incorporating Latin American fine art and folkloric influences. Drawing inspiration from Gloria Anzald a, Frida Kahlo, Leonora Carrington, tattoo artists, and comic book heroes, among other sources, this is a book of intelligence, humor, deep feeling, and, above all, duende.

JENNIFER GIVHAN is a Mexican American poet who grew up in the Imperial Valley in Southern California. She earned her MFA in Poetry from Warren Wilson College in North Carolina and an MA in English Literature at California State University, Fullerton. Her writing has appeared widely in literary journals and anthologies, including Best New Poets 2013, AGNI, Prairie Schooner, Indiana Review, Rattle, and The Collagist. She was also the recipient of a 2015 NEA individual artist's grant.
Loading...
or support indie stores by buying on