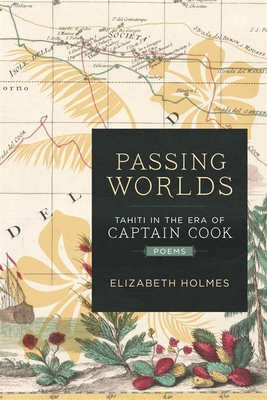 Tahiti in the Era of Captain Cook

Deeply researched and deeply felt, Passing Worlds is a poetic reimagining of the first encounters of Europeans and Tahitians during the historic voyages of Captain James Cook. Although the expeditions brought back impressive stores of knowledge and new plant and animal specimens, those scientific rewards came at a high human cost. Examining both imperialism and exploration, Holmes illuminates the cultural exchanges, clashes, miscommunications, and friendships that developed during these European sojourns, including the Tahitians' impressions of their strange visitors, the ways the British played into island politics, and how the "discovery" of Tahiti--with its easy life, absence of poverty, and liberal sexuality--influenced European ideas.

Part narrative, part lyric, the poems speak in multiple voices, bringing to life a fascinating cast of characters, from the black servants and common sailors to the aristocratic naturalist Joseph Banks, a female Tahitian leader, and an island girl caught in a system of sexual commerce. Marking the 250th anniversary of the launch of the Endeavour, which carried Captain Cook on his first voyage around the world, Passing Worlds is a poignant and imaginative depiction of a key point in a historic voyage and of a society whose delicate balance was altered and finally devastated by the impact of a far different one.

Elizabeth Holmes is the author of two previous books of poetry, The Patience of the Cloud Photographer and The Playhouse near Dark. Her poems have appeared in Poetry, Ploughshares, Prairie Schooner, The Southern Review, and many other journals. She lives in Ithaca, New York.
or support indie stores by buying on
Copyright © 2020 American Booksellers Association