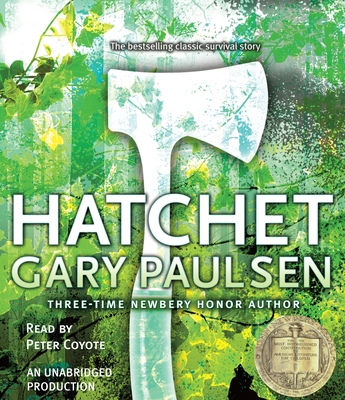 Thirteen-year-old Brian Robeson is on his way to visit his father when the single-engine plane in which he is flying crashes. Suddenly, Brian finds himself alone in the Canadian wilderness with nothing but a tattered Windbreaker and the hatchet his mother gave him as a present—and the dreadful secret that has been tearing him apart since his parents’ divorce. But now Brian has no time for anger, self-pity, or despair—it will take all his know-how and determination, and more courage than he knew he possessed, to survive.


“In a straightforward and compelling narration, Peter Coyote captures Brian's terror, anguish and exultation as he learns to survive alone in the wilderness.”–AudioFile

Peter Coyote's feature film credits include E.T., Jagged Edge, Buffalo Girls, and Outrageous Fortune. On stage, he appeared in the world premiere of True West. He also appears on the BDD Audio productions of Gary Paulsen's The River and Canyons.
Loading...
or support indie stores by buying on