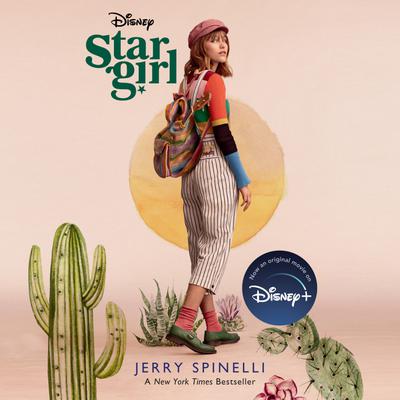 A modern-day classic and New York Times bestseller that celebrates the power of individuality and personal expression from beloved Newbery Medalist Jerry Spinelli.


Stargirl. From the day she arrives at quiet Mica High in a burst of color and sound, the hallways hum with the murmur of “Stargirl, Stargirl.” She captures Leo Borlock’ s heart with just one smile. She sparks a school-spirit revolution with just one cheer. The students of Mica High are enchanted. At first.

Then they turn on her. Stargirl is suddenly shunned for everything that makes her different, and Leo, panicked and desperate with love, urges her to become the very thing that can destroy her: normal. In this celebration of nonconformity, Newbery Medalist Jerry Spinelli weaves a tense, emotional tale about the perils of popularity and the thrill and inspiration of first love.

Don’t miss the sequel, Love, Stargirl, and Jerry Spinelli’s latest novel, The Warden’s Daughter, about another girl who can't help but stand out.

Growing up, Jerry Spinelli was really serious about baseball. He played for the Green Sox Little League team in his hometown of Norristown, Pennsylvania, and dreamed of one day playing for the major leagues, preferably as shortstop for the New York Yankees.

One night during high school, Spinelli watched the football team win an exciting game against one of the best teams in the country. While everyone else rode about town tooting horns in celebration, Spinelli went home and wrote “Goal to Go,” a poem about the game’s defining moment, a goal-line stand. His father submitted the poem to the Norristown Times–Herald and it was featured in the middle of the sports page a few days later. He then traded in his baseball bat for a pencil, because he knew that he wanted to become a writer.

After graduating from Gettysburg College with an English degree, Spinelli worked full time as a magazine editor. Every day on his lunch hour, he would close his office door and craft novels on yellow magazine copy paper. He wrote four adult novels in 12 years of lunchtime writing, but none of these were accepted for publication. When he submitted a fifth novel about a 13-year-old boy, adult publishers once again rejected his work, but children’s publishers embraced it. Spinelli feels that he accidentally became an author of children’s books.

Spinelli’s hilarious books entertain both children and young adults. Readers see his life in his autobiography Knots in My Yo-Yo String, as well as in his fiction. Crash came out of his desire to include the beloved Penn Relays of his home
state of Pennsylvania in a book, while Maniac Magee is set in a fictional town based on his
own hometown.

When asked if he does research for his writing, Spinelli says: “The answer is yes and no. No, in the sense that I seldom plow through books at the library to gather material. Yes, in the sense that the first 15 years of my life turned out to be one big research project. I thought I was simply growing up in Norristown, Pennsylvania; looking back now I can see that I was also gathering material that would one day find its way into my books.”

On inspiration, the author says: “Ideas come from ordinary, everyday life. And from imagination. And from feelings. And from memories. Memories of dust in my sneakers and humming whitewalls down a hill called Monkey.”

Spinelli lives with his wife and fellow writer, Eileen, in West Chester, Pennsylvania. While they write in separate rooms of the house, the couple edits and celebrates one another’s work. Their six children have given Jerry Spinelli a plethora of clever material for his writing.

Jerry Spinelli is the author of more than a dozen books for young readers, including Maniac Magee, winner of the Newbery Medal. His latest novel, Stargirl, was a New York Times bestseller and an ALA Top Ten Best Book for Young Adults.