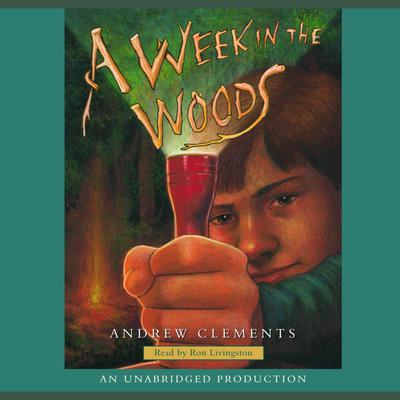 A Week in the Woods (Digital Audiobook)

Mark Chelmsley IV has never felt truly at home anywhere. With only four months left in the fifth grade before he starts at an exclusive boarding school, Mark doesn't think it's even worth trying to settle in. What changes his mind is a Week in the Woods- the annual school camping trip. But even there, things go wrong. Mark covers for a friend and lands himself in Big Trouble: his nemesis, science teacher Mr. Maxwell, suspends him. Just as Mr. Maxwell is about take Mark home, Mark runs off into the woods, putting his survival skills- and Mr. Maxwell's- to the test.

Andrew Clements is the author of four novels about school life, Frindle, The Landry News, The Janitor's Boy, and The School Story, which are all available from Listening Library. Frindle won the Christopher Award and has appeared on more than thirty-five state award lists. The Landry News is a New York Times bestseller. Mr. Clements taught in the public schools near Chicago for seven years before moving east to begin a career in publishing. Now a full-time writer, he lives in central Massachusetts with his wife and their four children.