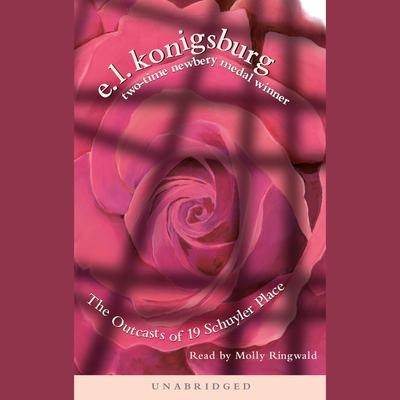 E. L. Konigsburg revisits the town of Epiphany to tell the story of Margaret Rose Kane, Connor's older half-sister. It's about the summer when Margaret Rose turned twelve--the same year that Cabbage Patch dolls were popular, that Sally Ride became the first woman to go into space, that El Niño turned the world upside-down. Margaret Rose begins her summer with a miserable experience at camp; from which she's rescued by her beloved, eccentric uncles. Little does she know that her uncles, in turn, need rescuing themselves--from a tyrannical city council determined to tear down her uncles' life work--three spectacularly beautiful towers that her uncles have been building since before Margaret was a baby.

THE OUTCASTS OF 19 SCHUYLER PLACE is a rousing audiobook about intelligence, art, and the fierce preservation of individuality.

E. L. KONIGSBURG received the Newbery Medal for From the Mixed-Up Files of Mrs. Basil E. Frankweiler, and the same year had a Newbery Honor Book, Jennifer, Hecate, William McKinley and Me, Elizabeth. In 1996, she received the Newbery again for The View from Saturday. She has since written a number of very successful books, including, most recently, Silent to the Bone, a NYT bestseller, and ALA Best Book for Young Adults, and an ALA Notable Book. She has spoken to groups all over the nation, has had her books translated into many languages (including Japanese), and is one of the most important, beloved figures in the world of children's books today. She lives in Ponte Vedra Beach, Florida.