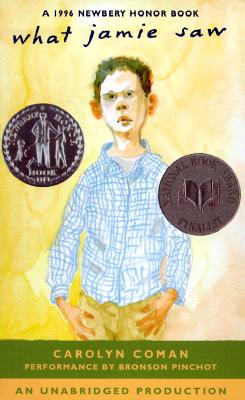 So begins one of the most compelling novels for young readers published in recent memory. It is a story of survival—how nine-year-old Jamie, his mother, and his baby sister Nin leave an abusive situation, move to a small trailer in the woods, and slowly learn how to trust the people around them—and each other.

Praise For What Jamie Saw…

"The chillingly rhythmic opening scene left me breathless and hooked--[This] story could have been bleak--Instead, it comes laced with spiritual and literal magic." -The New York Times Book Review