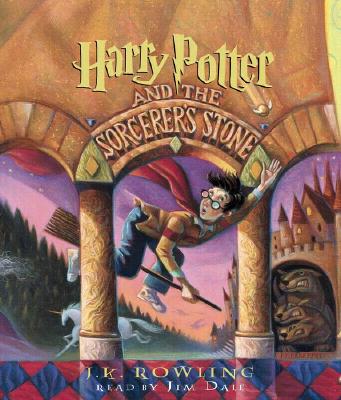 Harry Potter and the Sorcerer's Stone

Harry Potter has no idea how famous he is. That's because he's being raised by his miserable muggle aunt and uncle who are terrified Harry will learn that he's a wizard, just as his parents were.

But everything changes when Harry is summoned to attend an infamous school for wizards and he begins to discover some clues about his illustrious birthright.

From the surprising way he is greeted by a lovable giant, to the unique curriculum and colorful faculty at his unusual school, Harry finds himself drawn deep inside a mystical world he never knew existed and closer to his own noble destiny.

Praise For Harry Potter and the Sorcerer's Stone…

"A charming, imaginative, magical confection of a novel." -- Boston Globe
"Harry is destined for greatness." -- The New York Times

J.K. Rowling was a struggling single mother when she wrote the beginnings of Harry Potter and the Sorcerer's Stone on scraps of paper at a local cafe.  But her efforts were soon rewarded with an award from the Scottish Arts Council enabling her to finish the novel.  She has since won numerous awards including the ABBY Award (American Booksellers Award) 1999.
Loading...
or
Not Currently Available for Direct Purchase