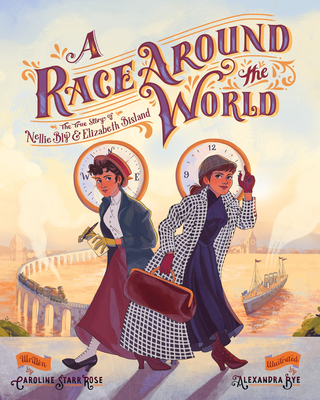 A Race Around the World

In 1889, New York reporter Nellie Bly—inspired by Jules Verne's Around the World in 80 Days—began a circumnavigation she hoped to complete in less time. Her trip was sponsored by her employer, The World. Just hours after her ship set out across the Atlantic, another New York publication put writer Elizabeth Bisland on a westbound train. Bisland was headed around the world in the opposite direction, thinking she could beat Bly's time. Only one woman could win the race, but both completed their journeys in record time.

Praise For A Race Around the World: The True Story of Nellie Bly and Elizabeth Bisland (She Made History)…

"Rose captures both the wonder of the world as the women experience it, as well as the dangers and miseries of their journeys. An absorbing account of a real-life adventure." —Kirkus Reviews

"Some may know the name Nellie Bly, but have you heard of her around-the-world adventure and the parallel journey of another reporter, Elizabeth Bisland? The story of two daring women is well told in A Race Around the World (ages 4-8) by Caroline Starr Rose, illustrated by Alexandra Bye. In 1889 Bly, a reporter for the New York World newspaper, defied her editor who believed this was something only a man should undertake. The two women suffered weather delays and communication disruptions, but both completed the trip. An exciting story to inspire young adventurers." —The Christian Science Monitor