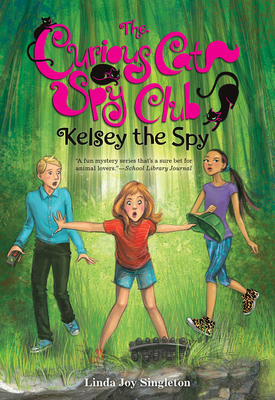 Kelsey can’t resist collecting secrets in her spy notebook just like her hero, Harriet the Spy. When she learns Leo has been hiding something from the group, she writes his secret in her notebook as well. But when the notebook goes missing, everything she’s collected about classmates, friends, and family could be revealed to the world! After receiving a ransom note, Kelsey tries to solve the mystery on her own. But she soon realizes she needs help from everyone in the CCSC to rescue the notebook, help a homesick 130-year-old Aldabra tortoise, and unmask a thief.

At age eleven, Linda Joy Singleton and her best friend created their own Curious Cat Spy Club. They even rescued three abandoned kittens. Linda was always writing as a kid—usually about animals and mysteries. She is now the author of more than thirty-five books for children and young adults, including YALSA-honored The Seer series and the Dead Girl trilogy. She lives in California.