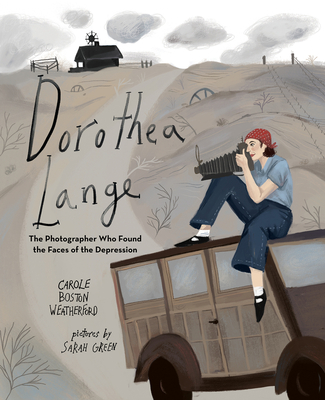 The Photographer Who Found the Faces of the Depression

Before she raised her lens to take her most iconic photo, Dorothea Lange took photos of the downtrodden from bankers in once-fine suits waiting in breadlines, to former slaves, to the homeless sleeping on sidewalks. A case of polio had left her with a limp and sympathetic to those less fortunate. Traveling across the United States, documenting with her camera and her fieldbook those most affected by the stock market crash, she found the face of the Great Depression. In this picture book biography, Carole Boston Weatherford with her lyrical prose captures the spirit of the influential photographer.


Praise For Dorothea Lange: The Photographer Who Found the Faces of the Depression…

"A well-researched and inviting introduction to a woman whose important, compassionate art captured the nation’s attention." —Booklist

"Weatherford writes eloquently of Lange’s creative drive and compassion . . . Lange was not only an artist driven to make art but an activist whose images generated awareness of suffering and injustice." —Publishers Weekly

Carole Boston Weatherford is the author of several acclaimed poetry collections and poetic biographies, including Gordon Parks: How the Photographer Captured Black and White America, Sugar Hill: Harlem’s Historic Neighborhood, and Moses: When Harriet Tubman Led Her People to Freedom. She lives in North Carolina. Sarah Green is a California born-and-based illustrator. This is her first solo book but not her first foray into children's books. She studied illustration at the Rhode Island School of Design and graduated in 2014.
Loading...
or
Not Currently Available for Direct Purchase