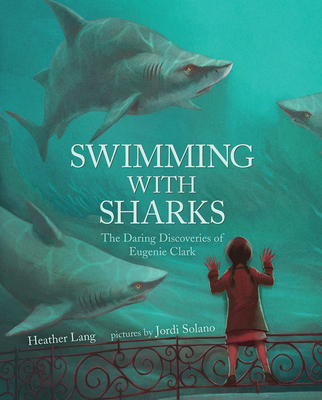 The Daring Discoveries of Eugenie Clark

Before Eugenie Clark's groundbreaking research, most people thought sharks were vicious, blood-thirsty killers. From the first time she saw a shark in an aquarium, Japanese-American Eugenie was enthralled. Instead of frightening and ferocious eating machines, she saw sleek, graceful fish gliding through the water. After she became a scientist—an unexpected career path for a woman in the 1940s—she began taking research dives and training sharks, earning her the nickname "The Shark Lady."


Praise For Swimming with Sharks: The Daring Discoveries of Eugenie Clark…

Heather Lang is the author of several picture books including The Original Cowgirl and Queen of the Track: Alice Coachman, Olympic High-Jump Champion. She lives in Massachusetts. Jordi Solano never leaves home without a sketchbook and pencil. He lives in Spain.
Loading...
or support indie stores by buying on