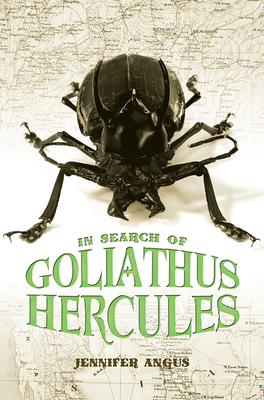 In Search of Goliathus Hercules

This is the fantastic story of Henri Bell, a near-orphan who in 1890 is sent to live with his ancient great-aunt and her extensive button collection. One rainy afternoon, Henri strikes up a conversation with a friendly fly on the windowsill and discovers he possesses the astounding ability to speak with insects. Thus commences an epic journey for Henri as he manages a flea circus, commands an army of beetles, and ultimately sets out to British Malaya to find the mythical giant insect known as Goliathus hercules. Along the way he makes friends both insect and human, and undergoes a strange transformation of his own. Artist Jennifer Angus, known for her Victorian-inspired exhibits of insect specimens, brings her distinctive sensibility to the pages of her first novel.

Jennifer Angus is a professor in the Design Studios department at the University of Wisconsin—Madison. She has been the recipient of numerous awards for her art, including Canada Council, Ontario Arts Council, and Wisconsin Arts Board grants. She lives in Madison, Wisconsin. This is her first novel.