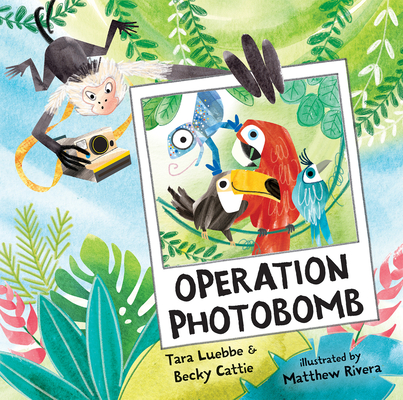 When Monkey finds a camera, Chameleon discovers that he loves to photobomb everyone! But Chameleon’s photobombing starts to drive the other animals bananas. Can they find a way to stop his wild antics?

"Illustrations in this upbeat offering are lush and playful. The narrative is a lighthearted take on the trickster tale, in which animals are anthropomorphized and act out challenging emotions, such as jealousy and frustration, that will resonate with young readers." —Kirkus Reviews

Becky Cattie has always had a flair for the dramatic and loves all things entertainment—especially character-driven narratives. She was a casting producer for reality TV shows like NBC’s America’s Got Talent, ABC’s Extreme Makeover, and E!’s The Simple Life in Los Angeles. She lives in Chicago. Tara Luebbe is a self-described “picture book nerd.” In her previous life, she owned a toy and bookstore in Atlanta, which was a catalyst for writing her own books. She lives with her husband and their three boys in South Carolina. Matthew Rivera originally hails from Arizona. He worked many years as an art director for agencies, large corporations, and toy companies before becoming an illustrator. He now lives in Los Angeles.
Loading...
or
Not Currently Available for Direct Purchase