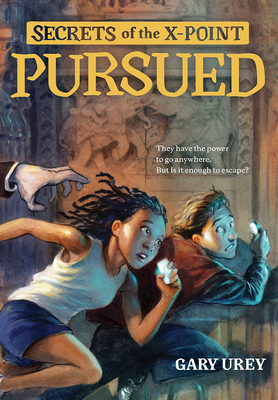 Pursued (Secrets of the X-Point #1) (Hardcover)

Axel Jack and Daisha Tandala are two thirteen-year-old friends running from a billionaire madman who killed their scientist parents and now wants what the kids have—a GeoPort (Geographical Transportation System.) The GeoPort, invented by their parents, has the ability to transport a person to any place on Earth within seconds. Knowing the power they had created, their parents' dying wish was for the kids to destroy the GeoPort before it lands in the wrong hands. But when the teens are separated by their pursuers, they must make a life or death attempt to find each other and get the GeoPort to a mysterious Indian Temple where the chase becomes more than just a high-tech game of hide-and-seek, but a war for control of everything—money, culture, politics, and power.

Gary Urey is a graduate of the American Academy of Dramatic Arts in New York and spent several years as an actor, script reader, and theater reviewer. He works as a Youth Market Director for the American Heart Association by day. Gary lives in Maine.

Praise For Pursued (Secrets of the X-Point #1)…