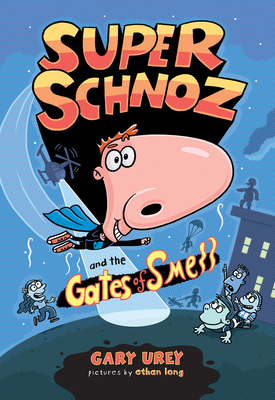 Super Schnoz and the Gates of Smell (Paperback)

Andy Whiffler is your average eleven-year-old boy…except that his nose is so big he can use it to fly and his sense of smell is a hundred thousand times stronger than any human. In the first book of this hilarious series, Andy moves to a new school and is instantly picked on because of the size of his nose. But when his classmates discover how powerful his nose is, they decide he is more of a comic book hero than a nerd, and dub him Super Schnoz. One day an evil corporation called ECU shuts down Andy's school in an evil plot to take over the world. Can Super Schnoz and his friends save the school?

Gary Urey is a graduate of the American Academy of Dramatic Arts in New York and spent several years as an actor, script reader, and theatre reviewer. He lives in Maine and is a Youth Market Director for the American Heart Association.

Ethan Long is an award-winning and internationally recognized children's book author and illustrator with over 60 children's books and an Emmy-nominated series to his credit. He currently lives with his wife, Heather, and his three children in Florida.