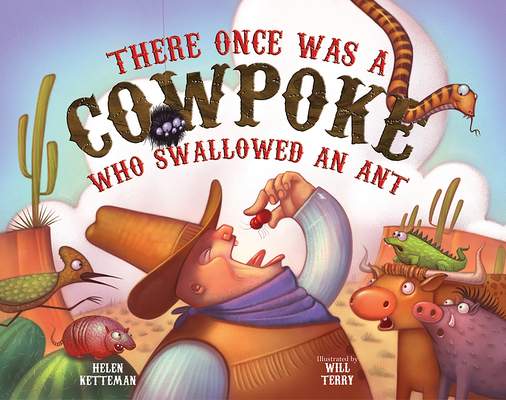 There Once Was a Cowpoke Who Swallowed an Ant (Hardcover)

By Helen Ketteman, Will Terry (Illustrator)

"There once was a cowpoke who swallowed an ant—
A fiery thing with a Texas-sized sting.
The cowpoke panted, and his voice got higher.
'Yippie-ti-yay! My stomach’s on fire!!'” In this Texas-styled reworking of "There Was an Old Lady Who Swallowed a Fly," a cowboy downs a variety of native Southwest creatures—a spider, a roadrunner, a lizard, an armadillo, a snake, a boar, and more—all to catch that ant! Another hilarious and vividly illustrated tale from the team behind Senorita Gordita and The Three Little Gators.

Helen Ketteman is the author of more than twenty picture books, including Senorita Gordita and The Three Little Gators, a 2010 Wanda Gag Award Honor Book. A longtime resident of Texas, she now lives on Sanibel Island, Florida, with her husband. www.helenketteman.com

Will Terry has illustrated more than twenty children's books, most recently Skeleton for Dinner. He teaches illustration part-time at Utah Valley State College and creates e-book apps. He lives in Cedar Hills, Utah, with his wife and three sons. www.willterry.com