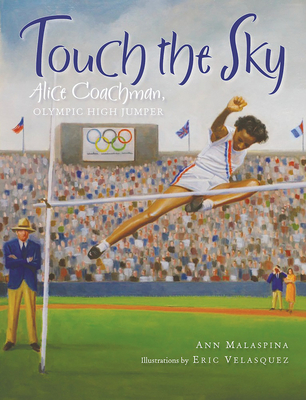 "Bare feet shouldn't fly. Long legs shouldn't spin. Braids shouldn't flap in the wind. 'Sit on the porch and be a lady,' Papa scolded Alice." In Alice's Georgia hometown, there was no track where an African-American girl could practice, so she made her own crossbar with sticks and rags. With the support of her coach, friends, and community, Alice started to win medals. Her dream to compete at the Olympics came true in 1948. This is an inspiring free-verse story of the first African-American woman to win an Olympic gold medal. Photos of Alice Coachman are also included.

Even as a child, Ann Malaspina liked to write stories. Ann has written numerous books for young people including Finding Lincoln and Phillis Sings Out Freedom. Ann lives in New Jersey with her husband and two sons. www.annmalaspina.com

Eric Velasquez, the son of Afro-Puerto Rican parents, was born in Spanish Harlem and grew up in Harlem in New York City. As a child, his love for doodling and drawing was strongly encouraged by his mother. From his grandmother he inherited a love of music and from his father he developed a love of movies. Growing up in this setting, Eric says, "Becoming an artist was a natural choice for me. I have never thought of being anything else." http://www.ericvelasquez.com/