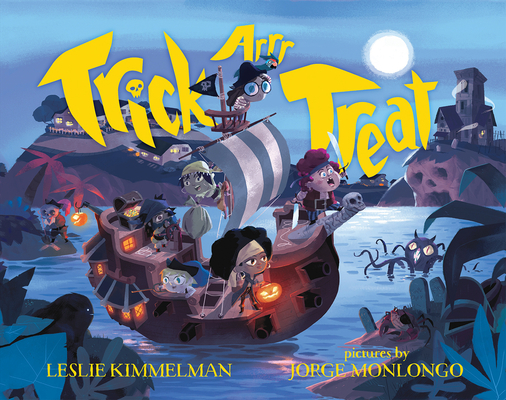 Charlotte Blue-Tongue, Peg-Leg Pete, Glass-Eyed Gabby, and their friends swashbuckle through the streets demanding loot and treasure from their neighbors in this Halloween pirate tale. As their world transforms from neighborhood to pirate's lagoon, they shout, "We be pirates. TRICK ARRR TREAT!" But what's lurking in the shadows? Are the pirates brave enough to defend their treasure?

Leslie Kimmelman is the author of numerous books including The Three Bully Goats, Round the Turkey, and the Sam and Charlie (and Sam Too!) early reader series. Her books have received many awards, including several Sydney Taylor Notable Books. She lives with her family in New York.

Jorge Monlongo is a Spanish artist based in landlocked Madrid. He illustrates children's books, writes and draws comic books, and paints canvas and walls. He has drawn a lot of crazy Hello Kitty adventures, a few Mameshiba books, a Mr. Peabody & Sherman mini-series, and a Cow and Chicken one shot.