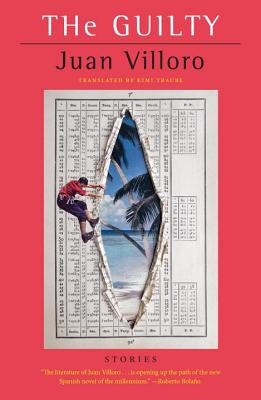 “The literature of Juan Villoro…is opening up the path of the new Spanish novel of the millennium.” Roberto Bolano

A brilliant, prize-winning collection of stories by Mexico’s most important living writer. From the semiotics of pet iguanas to the disillusionment of mariachi singers, Villoro reveals the deep dissatisfactions and absurdities of life in Mexico and its carnivalesque capital. We encounter a border trucker making a movie about illegal migrants, a cuckolded football superstar, and a gluten-free American journalist seeking the authentic Mexican experience. A master of the post-modern narrative, Villoro gives us contemporary Mexico through a complex interplay of culture and character psychology in the most surprising, fresh and humorous ways.


Praise For The Guilty: Stories…

Villoro’s point, punctuated by each of the stories in this powerful book, is that modern Mexico is finished, finally, trying to conform to outside notions of its tragedies….Villoro, a contemporary of Roberto Bolaño, offers a similar style and comic tone, and much to enjoy.
— The New York Times Book Review

Favorite Books of 2015: Magical realism is fun, but someone still has to clean up afterwards. Villoro’s stories, always beleaguered but never brooding, sift soberly through the debris and extract an earthbound, workaday kind of enchantment.

Villoro’s writing, translated into English, is almost George Saundersesque: disarming, critical, and hilarious all at the same time. His writing is fueled mainly by the absurdity of the interpersonal, which largely decenters some of the macro things that an American audience might fetishize (the war on drugs, immigration, etc.), though those things are there too.  The fact that The Guilty has been translated to English at all only adds to that decentering of the single story that American audiences have come to know about Mexico.
— Ploughshares

At last, an English translation brings his seriously funny take on identity to new audiences.
— Los Angeles Review of Books

The first collection of Villoro’s short stories to
be translated into English depicts the complexity of contemporary
Mexico in sharp, compelling prose. In tales with fascinating
protagonists and tightly crafted action, Villoro eschews stereotypes and
flips common perceptions of his homeland….Like his Mexican compatriots Valeria Luiselli and
Enrique Vila-Matas as well as such U.S. writers as Kirstin Valdez Quade
and Luis Alberto Urrea, Villoro rewards readers with refreshing,
unforgettable stories.
— Booklist

Villoro made me believe in the power of postmodernism to reflect back the multiple surfaces of our own highly constructed and often fictional lives. To do so while making the reader laugh out loud is no small feat.
— Rain Taxi Review of Books

The writing is razor sharp, the satire brilliant and biting…. Villoro's English language debut presents seven expertly crafted stories that are funny and agile but also illuminating, exploring the paradox of being a Mexican in Mexico.
— Three Percent

Top Book of 2015: The stories are sharp and hilarious and cut right through the (mostly) macho, male Mexican psyche. As a collection it is by turns entertaining and edifying and helped me understand our other closest neighboring country just a little bit better.

Juan Villoro is one of Mexico’s most prolific, prize-winning fiction writers. His books have won the Herralde Award, Antonin Artaud Award and The Reef was shortlisted for the Rezzori Prize. He lives in Mexico City and is a visiting lecturer at Yale and Princeton Universities.

Kimi Traube has an MFA in fiction and literary translation from Columbia University. Her translation of Juan Villoro's work has been published in BOMB Magazine.
Loading...
or
Not Currently Available for Direct Purchase