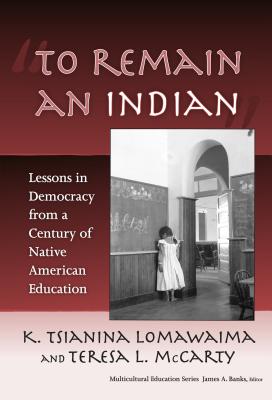 To Remain an Indian

What might we learn from Native American experiences with schools to help us forge a new vision of the democratic ideal--one that respects, protects, and promotes diversity and human rights? In this fascinating portrait of American Indian education over the past century, the authors critically evaluate U.S. education policies and practices, from early 20th-century federal incarnations of colonial education through the contemporary standards movement. In the process, they refute the notion of "dangerous cultural difference" and point to the promise of diversity as a source of national strength.

Featuring the voices and experiences of Native individuals that official history has silenced and pushed aside, this book:

K. Tsianina Lomawaima is Chair of American Indian Studies at the University of Arizona. Teresa L. McCarty is the Alice Wiley Snell Professor of Education Policy Studies at Arizona State University.
Loading...
or
Not Currently Available for Direct Purchase