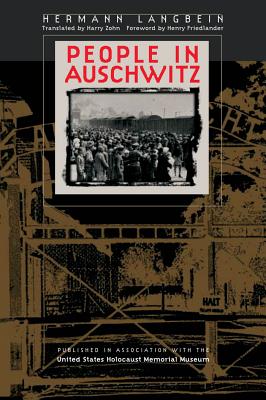 Hermann Langbein was allowed to know and see extraordinary things forbidden to other Auschwitz inmates. Interned at Auschwitz in 1942 and classified as a non-Jewish political prisoner, he was assigned as clerk to the chief SS physician of the extermination camp complex, which gave him access to documents, conversations, and actions that would have remained unknown to history were it not for his witness and his subsequent research. Also a member of the Auschwitz resistance, Langbein sometimes found himself in a position to influence events, though at his peril.
"People in Auschwitz" is very different from other works on the most infamous of Nazi annihilation centers. Langbein's account is a scrupulously scholarly achievement intertwining his own experiences with quotations from other inmates, SS guards and administrators, civilian industry and military personnel, and official documents. Whether his recounting deals with captors or inmates, Langbein analyzes the events and their context objectively, in an unemotional style, rendering a narrative that is unique in the history of the Holocaust. This monumental book helps us comprehend what has so tenaciously challenged understanding.