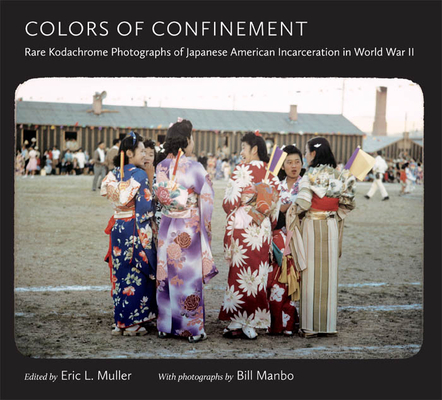 In 1942, Bill Manbo (1908-1992) and his family were forced from their Hollywood home into the Japanese American internment camp at Heart Mountain in Wyoming. While there, Manbo documented both the bleakness and beauty of his surroundings, using Kodachrome film, a technology then just seven years old, to capture community celebrations and to record his family's struggle to maintain a normal life under the harsh conditions of racial imprisonment. Colors of Confinement showcases sixty-five stunning images from this extremely rare collection of color photographs, presented along with three interpretive essays by leading scholars and a reflective, personal essay by a former Heart Mountain internee.
The subjects of these haunting photos are the routine fare of an amateur photographer: parades, cultural events, people at play, Manbo's son. But the images are set against the backdrop of the barbed-wire enclosure surrounding the Heart Mountain Relocation Center and the dramatic expanse of Wyoming sky and landscape. The accompanying essays illuminate these scenes as they trace a tumultuous history unfolding just beyond the camera's lens, giving readers insight into Japanese American cultural life and the stark realities of life in the camps.

Also contributing to the book are:

Jasmine Alinder is associate professor of history at the University of Wisconsin-Milwaukee, where she coordinates the program in public history. In 2009 she published Moving Images: Photography and the Japanese American Incarceration (University of Illinois Press). She has also published articles and essays on photography and incarceration, including one on the work of contemporary photographer Patrick Nagatani in the newly released catalog Desire for Magic: Patrick Nagatani--Works, 1976-2006 (University of New Mexico Art Museum, 2009). She is currently working on a book on photography and the law.

Lon Kurashige is associate professor of history and American studies and ethnicity at the University of Southern California. His scholarship focuses on racial ideologies, politics of identity, emigration and immigration, historiography, cultural enactments, and social reproduction, particularly as they pertain to Asians in the United States. His exploration of Japanese American assimilation and cultural retention, Japanese American Celebration and Conflict: A History of Ethnic Identity and Festival, 1934-1990 (University of California Press, 2002), won the History Book Award from the Association for Asian American Studies in 2004. He has published essays and reviews on the incarceration of Japanese Americans and has coedited with Alice Yang Murray an anthology of documents and essays, Major Problems in Asian American History (Cengage, 2003).

Bacon Sakatani was born to immigrant Japanese parents in El Monte, California, twenty miles east of Los Angeles, in 1929. From the first through the fifth grade, he attended a segregated school for Hispanics and Japanese. Shortly after Pearl Harbor, his family was confined at Pomona Assembly Center and then later transferred to the Heart Mountain Relocation Center in Wyoming. When the war ended in 1945, his family relocated to Idaho and then returned to California. He graduated from Mount San Antonio Community College. Soon after the Korean War began, he served with the U.S. Army Engineers in Korea. He held a variety of jobs but learned computer programming and retired from that career in 1992. He has been active in Heart Mountain camp activities and with the Japanese American Korean War Veterans.