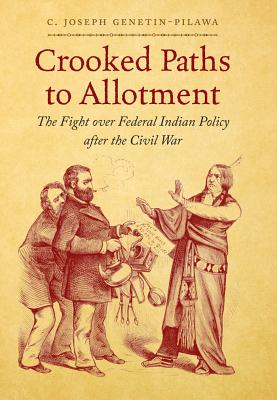 The Fight Over Federal Indian Policy After the Civil War

Standard narratives of Native American history view the nineteenth century in terms of steadily declining Indigenous sovereignty, from removal of southeastern tribes to the 1887 General Allotment Act. In "Crooked Paths to Allotment," C. Joseph Genetin-Pilawa complicates these narratives, focusing on political moments when viable alternatives to federal assimilation policies arose. In these moments, Native American reformers and their white allies challenged coercive practices and offered visions for policies that might have allowed Indigenous nations to adapt at their own pace and on their own terms. Examining the contests over Indian policy from Reconstruction through the Gilded Age, Genetin-Pilawa reveals the contingent state of American settler colonialism.
Genetin-Pilawa focuses on reformers and activists, including Tonawanda Seneca Ely S. Parker and "Council Fire" editor Thomas A. Bland, whose contributions to Indian policy debates have heretofore been underappreciated. He reveals how these men and their allies opposed such policies as forced land allotment, the elimination of traditional cultural practices, mandatory boarding school education for Indian youth, and compulsory participation in the market economy. Although the mainstream supporters of assimilation successfully repressed these efforts, the ideas and policy frameworks they espoused established a tradition of dissent against disruptive colonial governance.