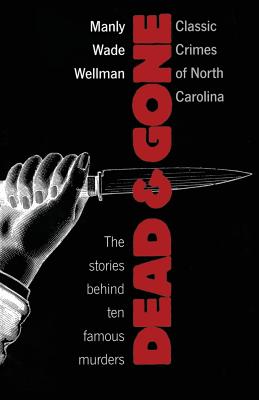 Violent dealth is amazingly apt to remind us of vigorous life; these ten stories of classic North Carolina murders which occurred between 1808 and 1914 represent a much neglected part of the exciting history of the state. Victims include a Confederate general, a lovely orphan girl, a pathetic little boy, and a highly offensive political boss. The motives are the usual ones -- gain, revenge, elimination, and jealousy.

The plaintive history and untimely death of Naomi Wise -- poor 'Omi they called her in Randolph County over five generations ago -- strikingly counterparts Dreiser's An American Tragedy; Ida Bell Warren, the veritable Lady Macbeth of Forsyth County; the arsenic poisoner of old Fayetteville; the kidnapping of Kenneth Beasley near the site of the Lost Colony; the almost perfect crime, the murder of the hated Reconstruction Senator Chicken Stephens of Caswell County, which in spite of the efforts of Claude G. Bowers and others went unsolved for years; the mad jealousy of Frankie Silver of Burke County which ended with bitter justice at the end of the law's noosed rope, the first woman hanged in the state -- these and other lively stories of famous North Carolina murders make fascinating reading.

The stories, told with authority and inviting informality, employ material from newspapers, court records, letters, family collections, and numerous works of local history. They evoke a feeling for a past time and place as well as for the untidy events themselves.