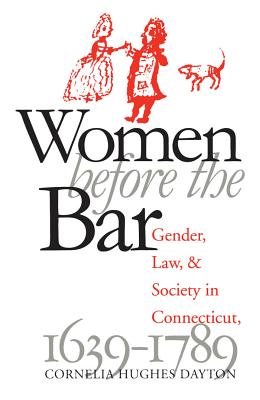 Women Before the Bar

Gender, Law, and Society in Connecticut, 1639-1789 (Published by the Omohundro Institute of Early American Histo)

Women before the Bar is the first study to investigate changing patterns of women's participation in early American courts across a broad range of legal actions--including proceedings related to debt, divorce, illicit sex, rape, and slander. Weaving the stories of individual women together with systematic analysis of gendered litigation patterns, Cornelia Dayton argues that women's relation to the courtroom scene in early New England shifted from one of integration in the mid-seventeenth century to one of marginality by the eve of the Revolution.

Using the court records of New Haven, which originally had the most Puritan-dominated legal regime of all the colonies, Dayton argues that Puritanism's insistence on godly behavior and communal modes of disputing initially created unusual opportunities for women's voices to be heard within the legal system. But women's presence in the courts declined significantly over time as Puritan beliefs lost their status as the organizing principles of society, as legal practice began to adhere more closely to English patriarchal models, as the economy became commercialized, and as middle-class families developed an ethic of privacy. By demonstrating that the early eighteenth century was a crucial locus of change in law, economy, and gender ideology, Dayton's findings argue for a reconceptualization of women's status in colonial New England and for a new periodization of women's history.