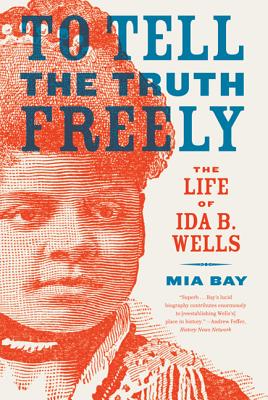 To Tell the Truth Freely

The Life of Ida B. Wells

Born to slaves in 1862, Ida B. Wells became a fearless antilynching crusader, women's rights advocate, and journalist. Wells's refusal to accept any compromise on racial inequality caused her to be labeled a "dangerous radical" in her day but made her a model for later civil rights activists as well as a powerful witness to the troubled racial politics of her era. Though she eventually helped found the NAACP in 1910, she would not remain a member for long, as she rejected not only Booker T. Washington's accommodationism but also the moderating influence of white reformers within the early NAACP. In the richly illustrated To Tell the Truth Freely, the historian Mia Bay vividly captures Wells's legacy and life, from her childhood in Mississippi to her early career in late-nineteenth-century Memphis and her later life in Progressive-era Chicago.


Praise For To Tell the Truth Freely: The Life of Ida B. Wells…

“In the richly illustrated To Tell the Truth Freely, the historian Mia Bay vividly captures Wells's legacy and life, from her childhood in Mississippi to her early career in late nineteenth-century Memphis and her later life in Progressive-era Chicago.” —The African American Book Review

“This well-researched book . . . should be useful to both mass communication scholars and a general audience, thanks to Bay's fluid writing style, attention to details, and facts.” —Jinx Coleman Broussard, Journalism History

“In this remarkable book, Mia Bay understands Ida B. Wells in full--as thinker, writer, crusader, politician, and woman of the world. Finally, we have a biography worthy of one of the bravest and most influential activists in U.S. history.” —Michael Kazin, author of A Godly Hero: The Life of William Jennings Bryan

“Ida B. Wells is one of America's most important yet relatively unknown historical figures. Absorbing and insightful, To Tell the Truth Freely deftly chronicles the way in which her extraordinary life and career altered the evolution of race and democracy in late nineteenth- and early twentieth century America.” —Peniel E. Joseph, author of Waiting 'Til the Midnight Hour: A Narrative History of Black Power in America

“Mia Bay's biography of Ida B. Wells is as sharp and sassy as the woman herself. The vigilance and bravado of this dynamic black woman crusader shines through on every page. Bay's triumphant tapestry reveals the life and times of an unsung heroine woven into battles for African American freedom.” —Catherine Clinton, author of Harriet Tubman: The Road to Freedom

“At last--an eloquent, concise, yet richly detailed account of Ida B. Wells. Beautifully crafted, this book restores Wells to her rightful place in American political history by telling her story with verve and grace.” —Barbara D. Savage, author of Your Spirits Walk Beside Us: The Politics of Black Religion

“Superb . . . Having been squeezed out of a role in national civil and women's rights organizations, Wells lost a prominent place in the historical record. It took several generations before her relentless and often discomforting agitation for social justice received the appreciation it deserved, as scholars over the last twenty years gradually reestablished her place in history. Mia Bay's lucid biography contributes enormously to this project.” —Andrew Feffer, History News Network

Mia Bay (Ph.D., Yale University) is Professor of History at Rutgers University and the Director of the Rutgers Center for Race and Ethnicity. Her publications include To Tell the Truth Freely: The Life of Ida B. Wells and The White Image in the Black Mind: African-American Ideas about White People, 1830-1925. She is a recipient of the Alphonse Fletcher Sr. Fellowship and the National Humanities Center Fellowship. Currently, she is at work on a book examining the social history of segregated transportation and a study of African American views on Thomas Jefferson.
Loading...
or support indie stores by buying on