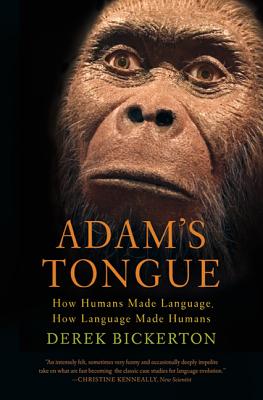 How Humans Made Language, How Language Made Humans

How language evolved has been called "the hardest problem in science." In Adam's Tongue, Derek Bickerton—long a leading authority in this field—shows how and why previous attempts to solve that problem have fallen short. Taking cues from topics as diverse as the foraging strategies of ants, the distribution of large prehistoric herbivores, and the construction of ecological niches, Bickerton produces a dazzling new alternative to the conventional wisdom.

Language is unique to humans, but it isn't the only thing that sets us apart from other species—our cognitive powers are qualitatively different. So could there be two separate discontinuities between humans and the rest of nature? No, says Bickerton; he shows how the mere possession of symbolic units—words—automatically opened a new and different cognitive universe, one that yielded novel innovations ranging from barbed arrowheads to the Apollo spacecraft.

Written in Bickerton's lucid and irreverent style, this book is the first to thoroughly integrate the story of how language evolved with the story of how humans evolved. Sure to be controversial, it will make indispensable reading both for experts in the field and for every reader who has ever wondered how a species as remarkable as ours could have come into existence.'


Praise For Adam's Tongue: How Humans Made Language, How Language Made Humans…

“Derek Bickerton has long been a leading thinker concerning the evolution of language. In his latest book, Adam's Tongue, Bickerton relishes his role as agent provocateur, offering witty demolitions of rival theories, admitting past errors, and providing an invigorating defense of the construction of ecological niches as the new grand truth for the theory of language evolution.” —Michael A. Arbib, Director, USC Brain Project, University of Southern California

“Bickerton skewers linguists, paleontologists, and animal behaviorists alike, reviews some of the currently popular neurobiological theories on language evolution, provides some mea culpa moments, and openly throws in a few just-so stories--and from this somewhat improbable mix comes a well-thought-out book, one that takes the reader logically through his arguments with wit and verve. Whether the reader eventually agrees with Bickerton's thesis in its entirety or not, he or she will find the hours devoted to this book time well spent.” —Irene Pepp erberg, Professor of Psychology, Brandeis University, and author of Alex and Me

“The great puzzle of how human language evolved, and how it relates to animal communication, is tackled here with enthusiasm and directness by the always interesting Derek Bickerton. Being neither a complete gradualist nor a believer in Divine sparks, the author touches on all the issues and positions that are hotly debated today.” —Frans de Waal, Professor of Psychology, Emory University, and author of Our Inner Ape: A Leading Primatologist Explains Why We Are Who We Are

“Why is it that humans--and only humans--acquired language? Nobody knows for sure, but nobody has thought longer or harder about such questions than Derek Bickerton. A tour de force!” —Gary Marcus, Professor of Psychology, New York University, and author of Kluge: The Haphazard Construction of the Human Mind

“An accessible and engaging book on a very complex topic: the evolution of language.” —Rebecca Bollen Manalac, Library Journal

“Reading Adam's Tongue is like stepping back into the classroom of a quirky, vibrant, impassioned thinker engaged in a most perplexing problem: How did language arise, and which came first: language or complex thought?” —Christine Thomas, The Honolulu Advertiser

Derek Bickerton is Professor Emeritus of Linguistics at the University of Hawaii. His book Bastard Tongues was published in 2008, and Adam’s Tongue in 2009.
Loading...
or support indie stores by buying on