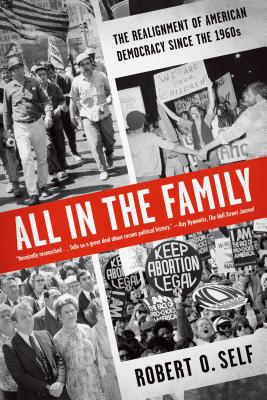 All in the Family

The Realignment of American Democracy Since the 1960s

In the 1960s, Lyndon Johnson's Great Society and War on Poverty promised an array of federal programs to assist working-class families. In the 1980s, Ronald Reagan declared the GOP the party of "family values" and promised to keep government out of Americans' lives. Again and again, historians have sought to explain the nation's profound political realignment from the 1960s to the 2000s, five decades that witnessed the fracturing of liberalism and the rise of the conservative right. The award-winning historian Robert O. Self is the first to argue that the separate threads of that realignment—from civil rights to women's rights, from the antiwar movement to Nixon's "silent majority," from the abortion wars to gay marriage, from the welfare state to neoliberal economic policies—all ran through the politicized American family.

Based on an astonishing range of sources, All in the Family rethinks an entire era. Self opens his narrative with the Great Society and its assumption of a white, patriotic, heterosexual man at the head of each family. Soon enough, civil rights activists, feminists, and gay rights activists, animated by broader visions of citizenship, began to fight for equal rights, protections, and opportunities. Led by Pauli Murray, Gloria Steinem, Harvey Milk, and Shirley Chisholm, among many others, they achieved lasting successes, including Roe v. Wade, antidiscrimination protections in the workplace, and a more inclusive idea of the American family.

Yet the establishment of new rights and the visibility of alternative families provoked, beginning in the 1970s, a furious conservative backlash. Politicians and activists on the right, most notably George Wallace, Phyllis Schlafly, Anita Bryant, and Jerry Falwell, built a political movement based on the perceived moral threat to the traditional family. Self writes that "family values" conservatives in fact "paved the way" for fiscal conservatives, who shared a belief in liberalism's invasiveness but lacked a populist message. Reagan's presidency united the two constituencies, which remain, even in these tumultuous times, the base of the Republican Party. All in the Family, an erudite, passionate, and persuasive explanation of our current political situation and how we arrived in it, will allow us to think anew about the last fifty years of American politics.


Praise For All in the Family: The Realignment of American Democracy Since the 1960s…

“Self . . . has heroically researched the history of the culture wars from the early 1960s to the present. He offers a provocative analysis that accounts for today's alliance between small-government and social conservatives, on the one hand, and welfare-state and social liberals, on the other . . . All in the Family tells us a great deal about recent political history.” —The Wall Street Journal

“[A] powerful, well-researched account of how the efforts of marginalized groups to assert their rights as citizens ran up against the resistance of entrenched privilege, setting the stage for the polarization that grips US politics today . . . [Self] reminds us that our democracy is an imperfect thing, only as noble as the people who constitute it.” —The Boston Globe

“All in the Family is meticulous, convincing, and engaging . . . Self has written a book that should become the authoritative social history of the U.S. since the 1960s.” —Library Journal

“Most of the stories we have told about American politics in recent decades have tended to divide the world between social issues and economic issues . . . In his new book, All in the Family: The Realignment of American Democracy Since the 1960s, Robert O. Self . . . rewrites this story from its most basic assumptions . . . brilliant.” —Mark Schmitt, The Washington Monthly

“Robert O. Self has done a remarkable thing: he has persuasively reinterpreted the rise of conservative politics in the last third of the twentieth century as rooted in the battle over gender and sexuality. In short, disputes over the 'state of the family' became as much about the nature of the state as about the morality of the family. Self makes many new and fascinating connections between the public and private spheres of American life.” —Lizabeth Cohen, author of A Consumers' Republic: The Politics of Mass Consumption in Postwar America

“In this breathtaking chronicle of American politics over the last half century, Robert O. Self points to sexual politics as the source of the shift from liberalism to conservatism. He takes a fresh look at the ‘rights revolution' to offer sweeping new interpretations of the rise of ‘family values,' the culture wars, and neoliberalism. Another tour de force from a brilliant historian.” —Elaine Tyler May, author of Homeward Bound: American Families in the Cold War Era

“Complex, elegant, and persuasive, Robert O. Self's All in the Family is an extraordinary achievement. It's the best account yet of the challenge to the central icons of gender identity--breadwinner, soldier, heterosexual, wife, mother--and of the powerful countermovements that arose to defend them. Self's magnificent book offers a bold new interpretation of America's rightward tilt and the triumph of free-market capitalism.” —Dorothy Sue Cobble, author of The Other Women's Movement: Workplace Justice and Social Rights in Modern America

“Robert O. Self's All in the Family is a fresh and compelling synthesis of modern American political history, one that puts gender, sexuality, and race at the core of its analysis and overturns simplistic dichotomies between culture and economy. Indispensible for understanding our own times, it recounts the journey from equal rights to family values on a sweeping scale and in perceptive detail. A masterful account.” —Margot Canaday, author of The Straight State: Sexuality and Citizenship in Twentieth-Century America

ROBERT O. SELF is an Associate Professor of History at Brown University. His research focuses on urban history, the history of race and American political culture, post-1945 U.S. society and culture, and gender and sexuality in American politics. His first book, American Babylon: Race and the Struggle for Postwar Oakland, won four professional prizes, including the James A. Rawley prize from the Organization of American Historians (OAH). He is currently at work on a book about gender, sexuality, and political culture in the United States from 1964 to 2004.
Loading...
or support indie stores by buying on